Pepe Deluxe - Queen of the Wave 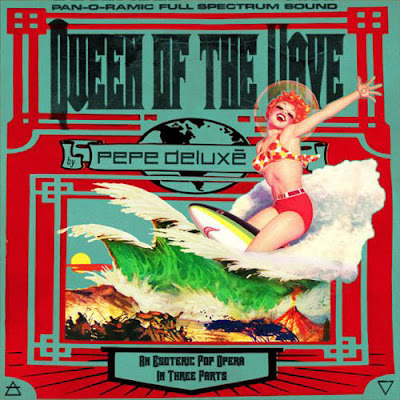 Reviewed by the Active Listener.

Finnish act Pepe Deluxe are a totally unique genre-straddling duo who with "Queen of the Wave" have surely released the most startlingly diverse album to be released so far this year. A pop opera based on 19th century novel "A Dweller on Two Planets" and its sequel, "An Earth Dweller’s Return" by Frederick S. Oliver, the first of which was supposedly written "automatically" when the terrified 18 year old author's hand would become possessed and scribble away of it's own accord.
It make an interesting story anyway, and "Queen of the Wave" is as suitably quirky as you'd expect coming from this source material.
While the majority of artist's with this kitchen sink approach simply throw in a bunch of different instruments, Pepe Deluxe's approach is typified by jumping from one genre to another - often three or four times in the same song. They can't be accused of lacking imagination in the methods they use either. How many albums can you name that make use of instruments like the Tesla Coil Synthesizer, Edison's Ghost Machine, the Psychical Predictor and the Great Stalacpipe Organ (apparently the world's largest instrument, found in the Luray Caverns of Virginia)?
Like the majority of rock opera the story is hard to follow and probably best ignored, but is presented in a fascinatingly diverse manner which traverses pop, trip hop, psychedelia, sassy Bond style soul, neo-classical and a hundred other genre's in between.
On first listen there's way too much going on to take in, and the next few listens made it seem even more overwhelming but eventually I managed to get my head around it and now it's one of my favorite albums of the year.
Closer "Riders on the First Ark" is my favorite - a moody epic which sounds like late sixties Scott Walker mixed with liberal doses of Portishead. Great stuff. Smart arse definitely, but with the emphasis on smart.
Check out the album trailer here:


Available on CD Here And on Vinyl Here.