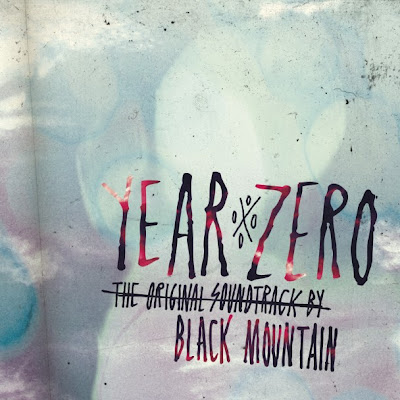 Surf music used to be damn cool, but somewhere along the way the definition of surf music evolved from the likes of the Surfaris and Taman Shud to Jack Johnson and Donovan Frankenreiter. It's heartening then to see that balance beginning to be readdressed with Black Mountain being asked to provide the soundtrack to new post-apocalyptic surf film "Year Zero". In order to capture the atmosphere of the film the band have elected to use four tracks from previous albums, as well as five new tracks.
This is where it gets problematic. The previously released material makes up more than half of the album's playing time. These four previously released tracks are no doubt the best choices for the scenes they're used in, but don't really show Black Mountain at their best, which makes their inclusion on the soundtrack a bit superfluous as a sampler of their music. It doesn't really work as an album that you would recommend to a Black Mountain beginner, and the fans will already have these tracks on the proper releases and in unedited form. Sensing perhaps that this is likely to be a niche release, it's only been released on vinyl and mp3 which will make it appeal more to collectors, but no doubt frustrate strangers to the band who've seen the movie and just want to buy the soundtrack.
The new material is a mixed bag, with Amber Webber taking the lead vocal duties on them all. Mary Lou is the most fully formed and stereotypically Black Mountain track, riffy with a catchy vocal refrain. Good stuff.  Breathe is another heavy piece with big shoegazy guitars, which is something a little different for them. The other three tracks are moodier, more experimental pieces with spoken word lyrics that manage to evoke Hawkwind, Pink Floyd's One of These Days and the Blade Runner soundtrack amongst others.
It'll be interesting to see whether this is signposting the direction of their next proper album back to the darker, more experimental work of "In The Future" or whether they've used this soundtrack as an outlet for their more esoteric ideas so they can knuckle down and follow the more concise route offered by "Wilderness Heart". I'm hoping for the former. Buy Year Zero On Vinyl Here