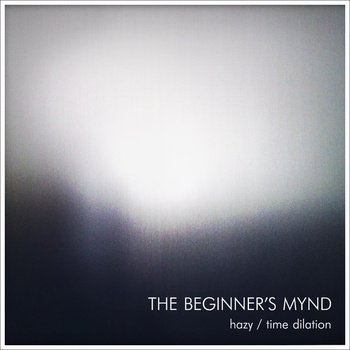 The Beginner's Mynd are an exciting new DC three piece who use strictly vintage analogue gear to capture songs that fully embrace the more melodic end of the sixties psychedelic pop spectrum.
"Hazy" combines a sparkling Rickenbacker intro that sounds like McGuinn copping the Beatles, with some charming Farfisa. There's a magic moment when you're sure you know what's coming next, but the guitars unexpectedly drop out to be replaced with what sounds like a wobbly mellotron, creating an instantaneous pastoral calm.
"Time Dilation" is a more subdued beast with plenty of jangle, a general air of melancholy, and beautifully rendered backwards guitars - like a cross between "I'm Only Sleeping" and "Rain".
A hugely promising debut, and apparently the follow-up single is recorded and ready to go too.

I had a quick chat with Dan McNabb from The Beginner's Mynd's to see what makes them tick:

There's not much info out there about who you guys are - introduce us briefly to the Beginner's Mynd.

Sure. I'm Dan McNabb. I write the songs, sing, and played the guitars and bass on the recordings. Larry Ferguson plays the drums, and Carrie Ferguson plays keyboards. The Beginner's Mynd had previously been the title of a home demo project I wrote and recorded under. A few months ago we all got together and talked about starting something up. I'd been writing a lot of new stuff, Larry and Carrie had some time, and so the plan of getting the The Beginner's Mynd going as a group was hatched.

You've got a great vintage sound - how much of that is intentional, and how much comes down to the gear you use?

Thanks - The tones on the recordings were very intentional, and the vintage instruments have a lot to do with them being at least evocative of an era. We also had the goal of doing everything analog to tape, with no computer involvement. While a particular sound is the obvious end goal, working with the limitations of the instruments and within the confines of that process has an effect on the performances too. There's a different energy when someone presses record on a tape machine; it springs to life with a "clunk", and then you need to deliver. I think the pressure helps. At times it can be a double-edged sword, but I think we rose to the challenge and are happy with the results.

Who are your main influences?

I have to take the opportunity to cite the Dukes of Stratosphear for being a massive philosophical influence. 25 O'Clock can be put right next to any of my favorite 60's psych records, and the fact that they did it using period recording techniques with all 60s vintage instruments in the 1980's (when I doubt it was fashionable or seemingly worthwhile to do so) speaks to the dedication of how far they went for the sake of authenticity and tone. So - to Sir John Johns, The Red Curtian, Lord Cornelius Plum, E.I.E.I. Owen, and John Leckie - thank you.

Who's on the scene now that you enjoy?

I hesitate to name names for fear of leaving people out, but in the last few days The Paperhead, The Higher State, Jacco Gardner, The Resonars, New Electric Ride, and Morgan Delt have spun on one playback device or another. It seems like I find out about a great new band every day that I could add to the list. These are exciting times.

What's the response been like to the debut single?

The response has been overwhelmingly positive.

You've got a master plan (I believe) to release digital singles, then release them as an album? Tell us a bit about this.

We listen to and collect records, so it's important to us that these songs get pressed to vinyl. At some point in the future everything online will be compiled and pressed. We don't have plans for this as of yet, but I'd say it's likely we'll put everyting out on an EP sooner than later.