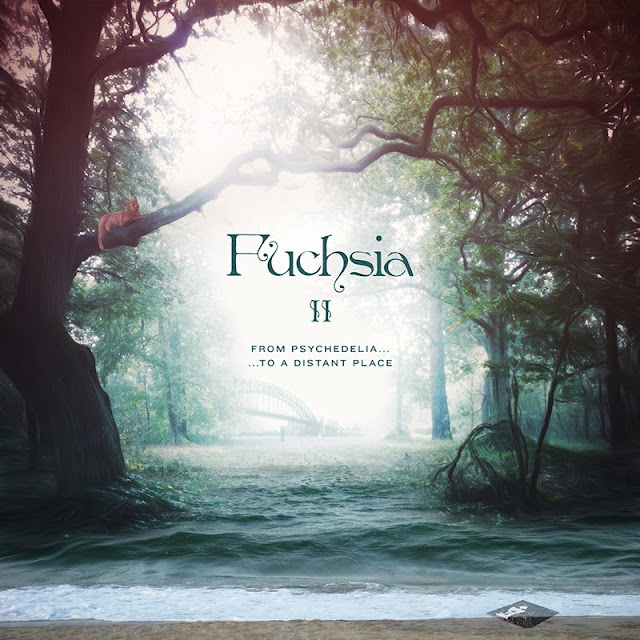 I love unexpected additions to musical legacies that we'd all assumed the book had been closed on. There's been a few of them of late (Comus and the Strawberry Alarm Clock spring to mind straight away), and while   approaching those particular albums with a 'forgiving' mindset allowed the most enjoyment to be had (voice's invariably having acquired the rugged timber that you wish the shiny, contemporary production values had instead), it's refreshing to report that at least one such album can be approached with the critical knives unsheathed and come away pretty much unscathed.
In 1972 Fuchsia released a debut album of progressive folk rock music that lay somewhere between the likes of Comus and the Principal Edwards Magic Theatre. It was a marvelous LP, and it sold bugger all. So is born the stuff of legends, and over the years "Fuchsia" acquired a rabid following and a solid reputation that didn't diminish (unlike many other albums of the same era) when bootleg copies became more widespread with the advent of file sharing. Now, forty one years later, and in a move that makes "The Chinese Democracy" look like a rush job ( instead of just sounding like one) comes the official follow up, and against all odds "From Psychedelia....To a Distant Place" is a top, top listen.
Those expecting an album with a similarly vintage sound as the original are setting themselves up for disappointment, as Tony Durant and his new band show no signs of retreading former glories, as should be apparent by the album's title. Durant's songwriting and arranging skills have evolved considerably over the past forty odd years, and while there's still a noticeable progressive edge to these songs, they're more immediately engaging than the songs on the debut (which could take a little adjusting to), and the lush production is very much now, rather than then.
Durant's voice has aged gracefully, at times sounding a little like Luke Haines, and the way it weaves in and out of the intricate string arrangement on "Fuchsia Song" is pretty lovely, and those string arrangements that made the first album so special are very much in evidence here too, with a degree of added sophistication and drama on "Girl From Kandahar" in particular.
The high quality is maintained throughout, with uniformly strong songwriting and excellent performances.
Great stuff then - a more consistently engaging, and daring record than we had any right to hope for, and an unexpected late addition that enhances rather than tarnishes this particular legacy.

Keep an eye out for an interview with Tony in these pages in the next few days.