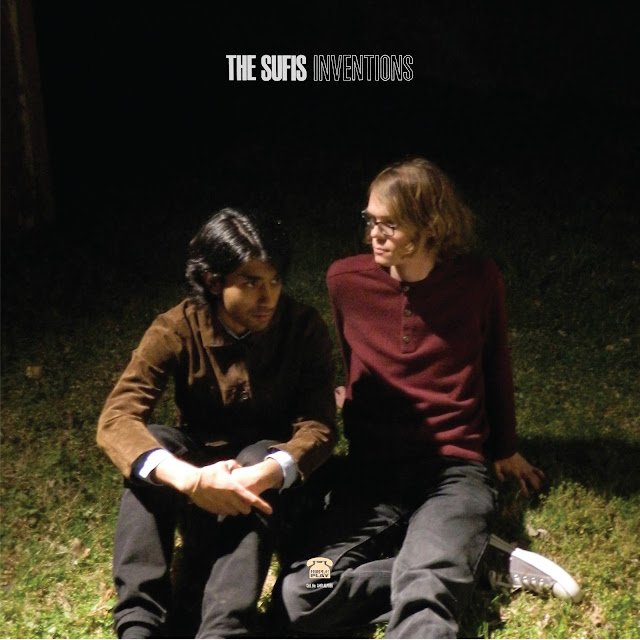 I got a bit of grief last year for so vigorously recommending the first Sufis album to a few people that couldn't handle the more experimental, oscillator-fuelled, sound collage bits that made up about half of that album. Fair call - I enjoyed those bits and thought they counter-balanced the more overtly pop moments on the album nicely, but I can see how others who heard a track like "Rosalie's Garden" might want an album full of those more simplistic, melodic pleasures.
Now down to a core duo of Calvin LaPorte & Evan Smith, it seems the Sufis are now on the same wavelength as these listeners : "I wanted to write concise pop songs, each with a unique and particular quality" LaPorte says in the accompanying press release, and that's exactly what he's done here. The freaky instrumentals are a thing of the past then, but that experimental mindset is still alive and well, albeit in a more consistently palatable form on these twelve (fourteen on the bonus track edition) acid-pop gems.
These two Nashville natives still sound like they've been both temporally and geographically displaced with the vast majority of these tunes sounding like Syd Barrett has hijacked the good ship "Revolver" with a few Kink(s)y baroque harpsichord flourishes for extremely good measure. You'd think Carnaby Street was just around the corner.
Several other tracks, notably "No Expression" also have a more raucous vintage garage vibe (more ragged folk-rock than the MC5 naturally), possibly a hangover from the Market Squares single they recorded with Paul Messis last year.
The vast majority though could be slotted into a 1968 U.K psych-pop playlist without eyebrows being significantly raised, and while you'd have to be pretty stubborn not to admit that tunes like the bass-driven "The End" take their cues from "Taxman" and "The Word", they're far from hollow retreads, with plenty of good humor (see "Most Peculiar Happening Cat") and lots of inventive touches.
"Inventions" is the Sufis doing what they do best, twisting the overly familiar into unfamiliar and exciting new shapes and the fact that they've assembled one of the most enjoyable albums of the year in the process is testament to their expertise and the natural ease with which they operate.

Get the vinyl LP here, or the CD here.
Burger Records will also be releasing on Cassette.