Trappist Afterland "Like a Beehive, The Hill Was Alive" Review 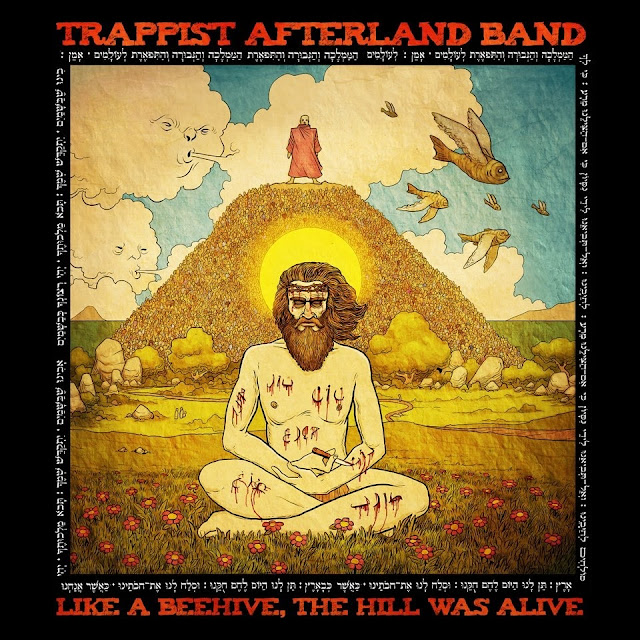 Devotional psychedelic folk has got to be a pretty niche genre right? Visit eBay and you'll find literally thousands of different albums in this supposedly niche genre. Where the hell did all of these come from? Why are these artists never featured on any of the myriad compilations that unendingly spew forth from the various psych genres? Burning questions, but questions with a pretty straightforward answer unfortunately.
Unscrupulous vinyl traders realized pretty early on in the piece that if they added "psychedelic" to their twee Christian folk LP's description said item's price would skyrocket, and thus was born the devotional psychedelic or acid folk genre. In all fairness, these artists themselves would have never considered themselves psychedelic in any fashion (indeed the idea is probably offensive to some of the more devout practitioners), while a very small percentage of these artists did come from a psychedelic background and made that obvious on their albums to a varying degree - the majority however were gentle beardy folk geezers with more rounded off edges than Cat Stevens and James Taylor put together.
It's with trepidation then that I approach anything given the "Devotional psych folk" handle, although with Melbourne based outfit Trappist Afterland I may have finally hit the jackpot. Simply speaking, their third album "Like a Beehive, The Hill Was Alive" sounds exactly like I'd hoped all those first generation LPs would sound like - enough acoustic instrumentation to warrant the folk moniker, but layered with all sorts of drones, sinister ritualistic chanting, psychedelic organ work, and beautiful, exotic sounding instrumentation from far off climes.
It's also more often than not decidedly sinister, with a creepy undercurrent that makes it difficult to discern exactly whom or what they're so righteously devoted to. "The Penitent's Rail" in particular dips it's toe into murky Comus inspired waters where there are all sorts of creepy things lurking.
The first three quarters of the album run very much along these diabolical, ritualistic lines until the closing one-two of "The Hoarder Stows" and "Beehive" arrive, cast in a regal splendor that suggests some sort of triumph of good over evil has just taken place under our very noses.
I'm certainly not smart enough to work my way through all of the subtext  and work out exactly what's going on here, but the mystery only adds to it's considerable appeal.
Very highly recommended.

Available digitally through the Bandcamp widget below, and coming soon on CD in a very limited edition on Eleven Willows.