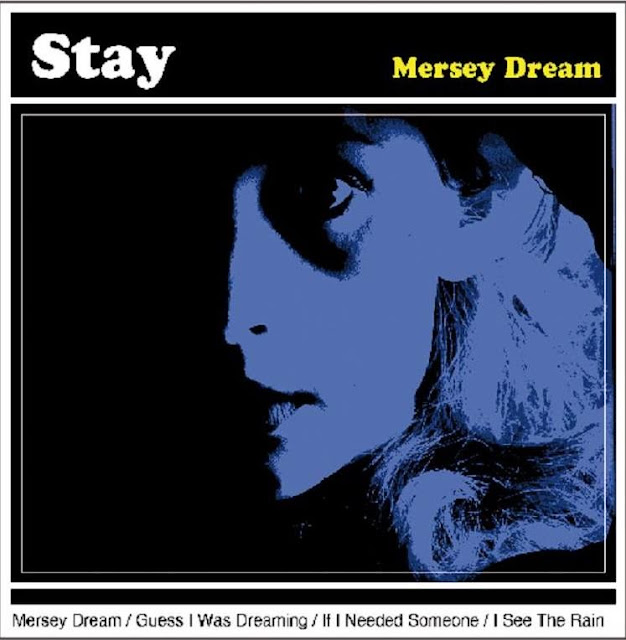 At the risk of sounding like a snob, encountering the phrase "fresh from supporting Beady Eye and Ocean Color Scene" in a press release would not usually encourage me to continue reading, but the unusually high caliber of material that Stay are covering on this 7" E.P, plus the fact that the esteemed Fruits de Mer label have deemed it worthy of release made me put my prejudices to one side briefly. Good thing too, as I bet the headliners at those particular shows were blown offstage (that's not a groupie joke) by these guys.
With four albums (and an earlier Fruits de Mer 7") behind them already, a veneer of professionalism was certainly expected, but "Mersey Dream" surpasses all expectations, delivering four immaculate slices of psychedelic mersey pop - all the more unusual as these lads hail from sunny Spain (although their last album 2012's "The Fourth Dimension" was recorded in Liverpool).
Comprising three very well chosen covers (obviously connoisseurs, these chaps), and one original that doesn't sound even remotely intimidated by the heavyweight mid to late sixties company it's keeping here, "Mersey Dream" may well be my favorite E.P of the year so far.
The original title track does admittedly sound quite a lot like Ocean Color Scene in places, although lacking their inherent naffness (sorry fans), and with a much more convincing vintage atmosphere than the Scene manage to capture, not to mention a particularly well written tune.
The covers are similarly solid, and awash in a lovely analogue glow with plenty of vintage psychedelic florishes. The Marmalade's "I See The Rain" gets an organ-heavy run through with some searing lead guitars, while the Beatles "If I Needed Someone" adds a bunch of sitar - fair enough, it is one of George's tune after all.
Best of all is the Fairytale's "Guess I Was Dreaming" which doesn't depart hugely from the original blueprint, but does a marvelously subtle job of enhancing everything that made that original such a ripper.
Great stuff - I'm ready for "Mersey Dream Volume two" - how about the Remo Four and the 23rd Turnoff next time?
Visit again same time tomorrow and we'll take a look at the other four Fruits de Mer releases for August.

Released early August by Fruits de Mer Records as a strictly limited edition 7" E.P - pre-order here now - these titles sell out very quickly and do not get digital or CD releases.

Check out some samples here: