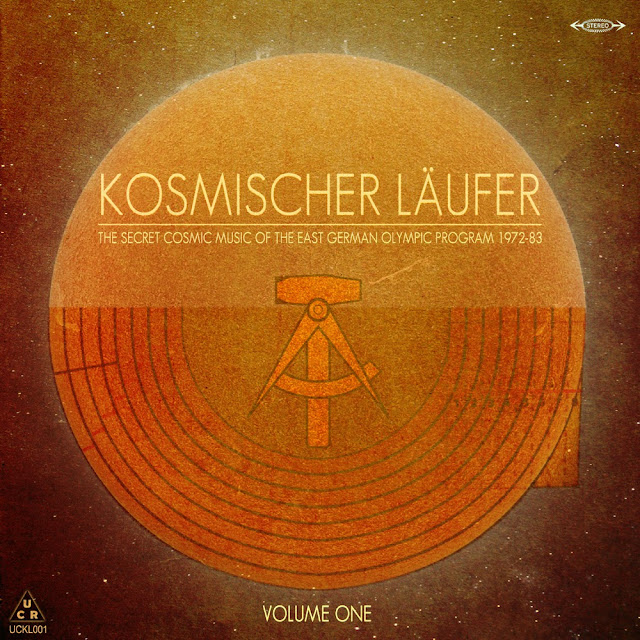 "For the first time since it was recorded in East Berlin over 30 years ago the music of Martin Zeichnete can finally be heard. A disciple of the Kosmische Muzik of the likes of Kraftwerk, Can and Neu! that was drifting across the Wall from the West, Martin's idea of using the motorik, hypnotic beat of krautrock in the training of athletes was taken and exploited by the DDRs Olympic Committee."

A great story, and the fact that Martin Zeichnete (Kosmischer Läufer / "Cosmic Runner")  is actually two Scottish gentlemen from the here and now with a penchant for vintage synthesizers doesn't take the shine off what at the end of the day is a damn fine piece of kosmiche musik.
Sure, every man and his dog is adding a motorik beat to their musik, sorry, music, these days (to the point where I never want to type the word again), but Kosmischer Läufer go one step further. They don't sound like they're merely influenced by the likes of Neu and Kraftwerk. You'd swear that between leaving Kraftwerk and forming Neu, Klaus Dinger and Michael Rother spent a couple of days in the studio and committed this to tape. We all love a fairy tale, but without music that sounds this authentic there's no way so many of us would have fallen for this one.
So musically you know what to expect - it kinda reminds me of the first Neu album without the discordant, challenging,  noisy bits, and with a heap more synths. How can that be a bad thing?
Bookended by two short pieces (3 minute warm-up and warm-down pieces), the three longer pieces are memorable additions to the kosmische canon that all but the most unprogressive will welcome with open arms.
I don't know whether it's a psychological symptom of the introductory story that makes this material sound so instantly familiar, but "Die lange Gerade" and "Sandtrommel" in particular have entrenched themselves in my psyche to the point where if I was to hear one in isolation, I'd probably swear on my life that it was from the seventies and that I'd been listening to it for years.
Marvelous.

There's a Kickstarter campaign running right now to get this pressed on vinyl - visit here to find out more or pledge. - I've made my pledge.