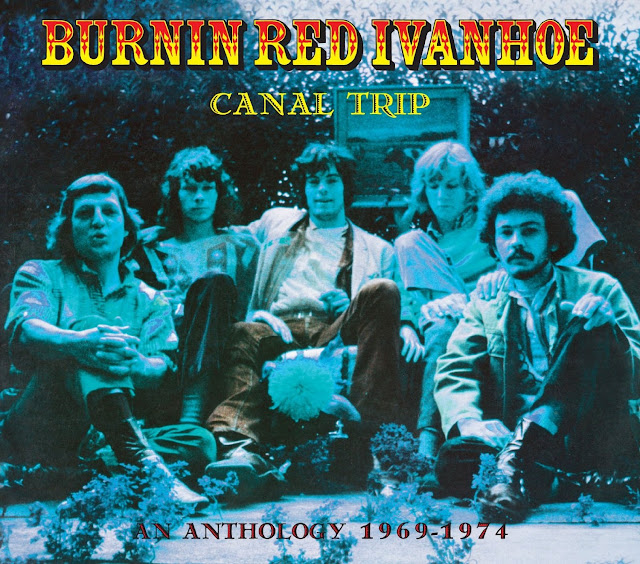 With a formidable live reputation (John Peel once claimed they were the most exciting live band on the planet), and a sprawling, but often patchy back catalogue, Burnin Red Ivanhoe are a perfect candidate for the double CD anthology treatment.
There's a lot of snobbery around collections like this (especially when you start looking at specialist genres, which lets make no bones about it - this is) but a well compiled anthology can really make you re-evaluate a band's significance. Let's remember that bands of this era were encouraged to tour constantly and release an album a year at least - a far cry from the workload of artists of our generation, and certainly an arrangement that ensured that a certain amount of filler was inevitable for all but the most prolific songwriters.
Kudos then to Esoteric for excising the more dubious moments and turning a good back catalogue into something pretty great here on "Canal Trip".
Debuting with a double LP in 1969 it was clear immediately that this Danish band had ideas aplenty, and mostly not above their station. There's little of the sense of  searching for an identity that most debuts betray, with hard progressive jazz, heavily Who influenced hard rock, rambling proto prog with a nod to the Canterbury scene and pastoral Scandinavian folk melodies effortlessly coallescing into something immediately distinctive and more than a little groundbreaking for the time.
Subsequent albums had moments of inspiration that matched that audacious debut (all pretty much excerpted here), but there was really not that far they could go in refining a sound that was seemingly all there from the beginning.
As far as highlights go "Antique Peppermint" showcases their melodic, hard edged progressive jazz sensibilities infectiously, while "Purple Hearts" shows they could have been contenders in the psych-pop field had they been so inclined. Best of all though is "Gong Gong The Elephant Song", a lengthy piece of space-rock infused progressive jazz with a driving guitar riff, and saxophonist Karsten Vogel enthusiastically playing the part of the titular elephant in a manner Eric Dolphy would be terrified by.
Sounds awful on paper doesn't it? Bloody great though.

A total bargain - get it here.