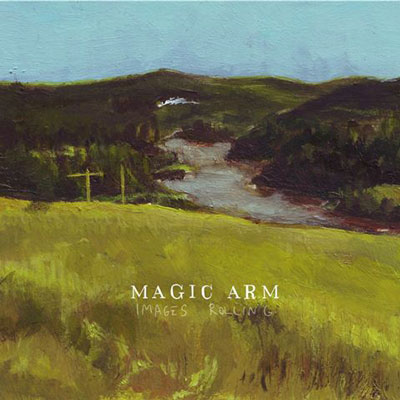 It's discovering albums like "Images Rolling" that helps me justify the amount of time I spend online instead of doing something practical like building a birdfeeder.
An offhand mention from someone I've never actually met over social media (a promise of psych-pop and comparisons to the Fleet Foxes and Midlake were the attention grabbing elements), and a day later I'm listening to "Images Rolling", an album that can be described conservatively as glorious, and one that I'd almost surely have never heard of otherwise. And there I was thinking that the internet was all about cat pictures.
Magic Arm is the nom de plume of Manchestrian (possibly not a real word) Marc Rigelsford and "Images Rolling" is his second album. Now, I'm a Rigelsford newbie, but the word is that his debut had more of an electronic edge to it. If that be the case he's stretched his wings a lot in the last four years, mastering an array of instruments accumulated from various acquaintances and turning part of the derelict house he lives in into some sort of magical, studio wonderland. The sound of "Images Rolling" is acutely informed by the environment of this house, with Rigelsford admitting to experimenting studiously with recording in different parts of the house before actual recording started, and the natural warmth on display here shows that it was time well spent.
From lead off single "Put Your Collar Up"s melancholy strings, through the kaleidoscopic, Caribou-esque psych-pop of "Warning Sign" these are articulate, lucid songs with Rigelsford providing the most sensitive of production, and playing everything bar violin and trumpet himself, belying the fact that he often sounds like he's directing a small orchestra.
Iron & Wine's Sam Beam, and Grizzly Bear's Ed Droste are fans, and it's easy to see why. "Images Rolling" is the sort of habit-forming album that quietly and confidently slips into your life, with songs like "Great Life" toeing the line perfectly between universal appeal, and a directness that suggests a one on one dialogue between artist and listener.
A quiet triumph, and a given for best of the year lists.

Available through the Bandcamp widget below on vinyl, CD or as a download.