A Chat with the In-Between Girl, Tatiana Hammond of Daisy House 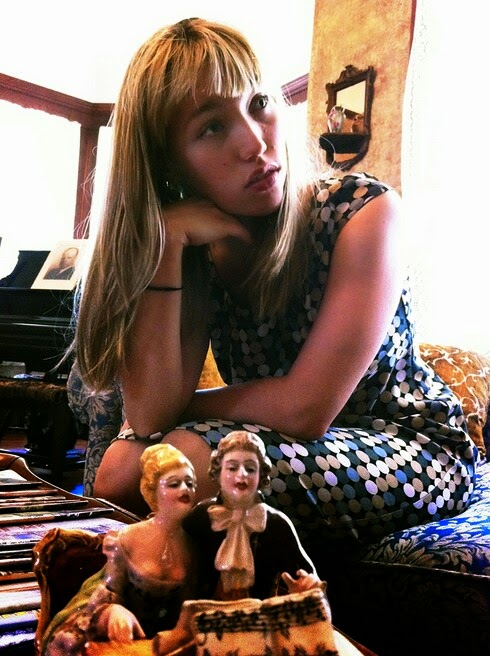 Interview by Elizabeth Klisiewicz, originally presented on The Big Takeover.

I had the great pleasure of reviewing Doug Hammond of Daisy House last year, and this time I am talking to his daughter Tatiana about her background and about the band’s beautiful new album, Beaus and Arrows. It’s a departure from their first album’s folk rock in that it introduces music hall stylings and pure pop that could have come straight from the 1960s. It is nice to see the band stretch their wings, and I wish them the best in achieving the recognition they so richly deserve.

What is your earliest musical memory? Do you have any vocal training? Because the clarity of your voice is simply superb.

First of all, thank you. It’s definitely improved on this second album. I’d never recorded anything before the first. I think the sound of my voice owes a lot to the ladies I’ve sung along with over the years , like Joni Mitchell, Sandy Denny, Chrissie Hynde, Mary Hopkin, Vashti, Feisty (Leslie Feist, ha), Mama Cass, and Marianne Faithfull. All of them are truly superb singers and my Dad’s given me tips like making sure to pronounce lyrics clearly, and breath control. My most important vocal training has come out of our relationship; it’s always been my Dad’s keen ear, his funny analogies, and our shared musical references that kept me going when it was hard for me in the beginning. When I get behind the mic, we basically start speaking in hilarious code to each other.

Earliest memory? If you grow up with my Dad, music transcends memory. ;) He made a mix tape for nap time for me when I was little that had Sebadoh, Talk Talk, Nina Simone, Leonard Cohen, Bob Dylan, Clannad, and Joni Mitchell on it…all mellow stuff. So I suppose “New Grass” is my earliest memory, either that or “This Frog” by Kermit ;)

What has been your involvement in the creative process with respect to songwriting and instrumentation on this new record? I saw the video where it looks like you are playing guitar and piano.

My Dad and I have collaborated on lyrics for some of the newer songs. Lots of the songs from the second album were based on things I was experiencing at the time. He knew if he turned my anecdotes into songs, I could own them when I sang. We’ve got a new co-written song called “Battle Days” which is a sweet, “I’ll follow the sun”/Leonard Cohen/ Beatles-y ballad, with half the lyrics in French, which I’ve studied for 7 years now.

In the video for “Raise High The Roof Beam Carpenter,” I sat down at that piano and accidentally blonked out that chord while the camera was rolling so Dad threw it on the album track. He writes and plays almost everything you hear, like 90% of it, and I interpret what he writes. I intend to write a bit more of my own going forward, but he’s been doing this since he was 10. It might take me a little while to catch up to him.

Have you and your Dad played out live with Chris since the first album was released?

Chris Stiles was a high school friend of my Dad’s and they hooked up after decades, and jammed a bit for old time’s sake. Chris had those opening chords for “Ready To Go”, and Dad, who’d been kicking around the idea of a freak-folk song collection, went home and finished it off in a Fairport Convention style for me to sing, which I’d never done before at that point. Chris and Daddy worked like that for about half the 1st album; a few chords from Chris, Daddy finishing it off. Pretty soon we had a whole album, but Chris wasn’t able to commit much time to it from the very beginning; he’s had a full time job and family to deal with, and since music is just a hobby for him, he basically bowed out. Dad and I have done about 17 shows “unplugged” locally and been invited to do some pretty amazing shows in the UK; like a 500 year old Royal Observatory! But until I graduate in May, touring is problematic. Once I graduate, look out!

What are your favorite tracks on the new album? What was the hardest song to record?

I like them all, but I get visibly giddy when I listen to “Time to Make Up For;” the instruments are so playful. I love the majesty of “Beaus and Arrows,” and the string arrangement my Dad came up with for it is amazing. I also love the melody and lyrics to “Why do you Dive so Deep in Beauty.” My Dad sings that one, and when I hear it my soul smiles.

Hardest to record? Probably “Woman From Walkern,” I have allergies and they always hit when I’m back home. “Woman” was sung through a handful of tissues! I also really, really like “Raise High The Roof Beam Carpenter”, which my Dad wrote when he was 21. He likes to say, “I had to wait 30 years for another 21 year old to sing it properly”.

“In Between Girl” was written in about 15 minutes while we were recording my vocals on something else. We love Sixties pop music in general; that’s a favorite and Dad wrote “Time To Make Up For” about me and my boyfriend. A sweet song.

Do you only work on Daisy House when you’re home on school vacation, or do you have ideas you communicate with Doug as they come to mind?

No, we’re always swapping song ideas and Youtube videos. My musical education never ends, and I don’t think we’ve had more than three conversations in the last few years that didn’t at least touch on music. We talk all the time about it, even when I’ve been away overseas.

What has been your biggest influence musically and artistically?

The Sixties (and the folkies, also present in the Seventies). I love the sounds of the Sixties. I love the enthusiasm and the freedom they had to be playful and innovative that I hear in things like Sandy Denny and Joni Mitchell especially, but also in Led Zeppelin, Jimi Hendrix, The Merry Go Round, The Association, The Left Banke etc. I like the fact that experimentation was more ubiquitous in pop culture. Creativity and “weirdness” and “music for music sake” seemed to be more encouraged back then by record labels.

I think that creativity is coming back today, though. I think there are a lot of people turning away from over-commodified music, and a renewed search for what feels more like “authentic art and expression.”

Do film and literature ever come into play as an influence? It appears so since your song “Raise High the Roof Beam Carpenter” is a J.D. Salinger title.

Definitely. “Raise High” is an old song of my Dad’s. It’s his nod to Dylan. We like to give our songs lots of richness, so if any art form inspires us, some of its mojo will go into our work. Folk tales are also a really good starting point for cool spooky things. So the Child Ballads and other old stories are inspiration for a lot of our folkier numbers (“Two Sisters,” “Why do you Dive”, “Emma”, “The Woman From Walkern”, “Beaus And Arrows”). Most of them have either a folk tale feel or were adapted. You may also notice we reference Cain and Abel in “Beaus and Arrows,” which is possibly one of my favorite songs on the album, and definitely our richest, in terms of its epic sound and story. The Bible, like folk tales, has big sin, big mystery, and big poetry in it. There’s nothing out of bounds for what we do.

Besides conquering the world, what would you like to see happen with Daisy House?

More radio. More press. More shows. More videos. When I think of Daisy House “conquering the world,” I think of our songs reaching across the world and I imagine people I’ve never met smiling the way I do when I hear these songs. I also think it would be nice to have the opportunity to inspire kids coming up, the way I’ve been inspired, to explore wit and creativity, rather than accepting conformity to a standard that tells girls they have to get breast implants and tattoos and be “transgressive” or something like that. I’d like our music to remind people that you don’t have to get things “perfect”, that the boundaries of life and self-expression are much wider than currently understood.

What can fans look forward to with upcoming musical works?

TH: I think after the first album, we had come up with a solid folk-rock template, so we developed that theme a bit further on “Beaus And Arrows”. We had a lot of fun playing with hybrid folk/pop themes, so there’s “molten-folk” as my Dad calls it on “What’s Your Time Bought?”, 60’s folk go-go on “In Between Girl”, Baroque-folk… you get the idea.

We really enjoyed making the pop stuff on B&A so I think we may be ready to drop our “El Camino”. I’d rather become the first “Daisy House”, instead of the next Mumford, and do for Folk-Rock/60’s Pop what the Black Keys did for blues-rock and the White Stripes did for mid-Sixties British invasion/Garage rock. We go to sources like they did, but it’s a slightly different vein of forgotten greatness that we mine that translates to modern kids as something fresh. Daisy House is generous music, and very old school at heart. Who knows? It might even be revolutionary.