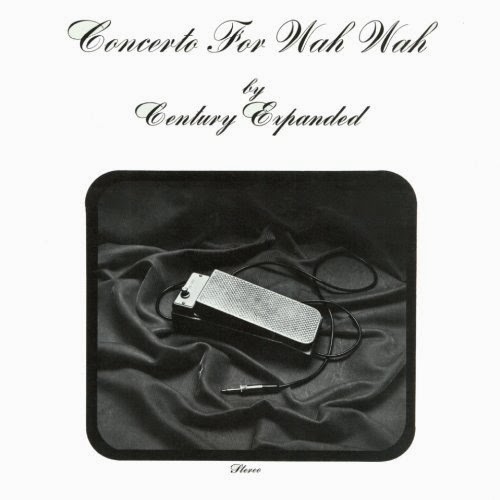 Here's another excellent slab of psychedelic exploitation rescued from obscurity by Gear Fab Records. Unlike the Gear Fab release I reviewed a few weeks back, this is one that's had to gather word of mouth through reputation alone until this recent CD reissue (and this recent vinyl reissue), and the legendary status it has acquired among collectors turns out to be pretty much deserving.

Originally released in 1970, on Jimmy Curtiss' (The Hobbits) Perception label, "Concerto For Wah Wah" is exactly what it says on the label, and despite the novelty approach (hey, this is an exploitation record after all) is pretty damn great. As is the norm for these sorts of releases, no one really knows who the band members were, but they really cook here.

The side-long "Melodic Variations in D Minor" starts things off with what seems like a very carefully constructed opus that makes excellent use of Beatley, "Abbey Road" era guitar arpeggios with doomy descending basslines combined with a proto prog "Atom Heart Mother" sort of Floyd feel which sounds extremely English. The titular guitar effects make themselves known extravagantly, but whoever the guitar wrangler is on this track is carefully in service of the song which is something of a lost classic, with a great backwards guitar freakout towards the end that paves the way for a wah wahed vocal chorus which by all rights should be the worst sort of cheese, but is totally irresistible.

"Rhythmic Variations in E Major" on the other hand is a total jam-fest with a proto Doobie Brothers soul funk riff acting as launching pad for all sorts of experimentalism, exploring the textural qualities of the pedal, and its rhythmic possibilities. During its playtime it's extremely engaging, even if its improvised nature makes it less memorable in the long run than its predecessor.

Oddly enough there's also a short extra in the form of "Prelude", which seems to be a completely improvised violin instrumental, which sounds like three and a half minutes of cat strangulation (with little in the way of wah wah, or for that matter guitar).

Mad as a bag of hammers, and one hell of a lot of fun.

Sadly the best track isn't available on Youtube, but the second side can be streamed here. Skip to around the 3.20 mark to avoid the diabolical violin torture: