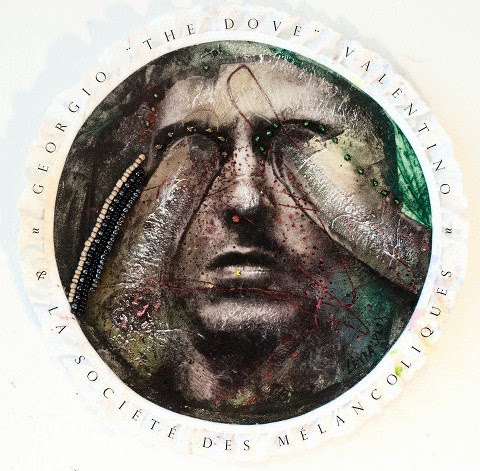 A performance piece collated over the space of a year and recorded across Belgium, France, Scotland, the Netherlands and the United States, ‘Mille Plateaux’ is an epic and sprawling work that at turns is heartrending and darkly romantic yet is also both thrilling and dynamic; truly this is Valentino’s magnum opus. Based in Belgium and featuring members of Tuxedomoon in his backing band La Société des Mélancoliques, Valentino is a chanson extraordinaire, the heart of Brel beating in his tales of the downtrodden, of danger and deception. And the music; a shimmering orchestra of 50's heartbreak, psych guitar, Bad Seeds piano and Love style trumpet flourishes, all creating an able backdrop to Valentino’s baritone.

‘I Wish We Were Insects (Edinburgh)’s creeping sitar styled guitar opens the album with atmospheric intent before the band create a storming psych maelstrom of violin, vocal and howling guitar. As an opener, this genuinely takes the breath away. Echoes of the Banshees and The Chameleons goth-psych guitar resonate as Valentino's croon swirls across the luxurious orchestration. Fans of Echo And The Bunnymen’s 'Ocean Rain' era will find much to love here. ‘Don’t Do Me Any Favours’ is a disorientating tango through doomed romance and vintage sci-fi keyboards. ‘Japanese Dream’ with its stirring and strident violin dramatics is a haunted and melancholy torch song of some power; think Tindersticks meets Nick Grey. Instrumental ‘The Gift of Fury’ is the bar band from hell; echoed 50's guitar twangs over urgent piano runs to create a Twin Peaks soundtrack that never was, scorched guitar reverbating through the pines. ‘Mille Plateaux (Brussels)’s guitar drives the song forward with desperate, brooding style, wailing across the shadows like the Bad Seeds meet Link Wray. ‘I Won’t Betray You’ is an unsettling and dark as night ballad, leading the listener into some deranged cabaret; something wicked this way comes indeed. The track maintains its solemnity until it explodes into furious life, the piano providing focused intent and the Eastern tinged guitar screaming white hot into the night. You must hear this; why Valentino is not spoken of in the same vein as Cave, McCulloch or Stuart Staples is a mystery. 'Mille Plateaux (Toulouse)' is an acoustic and reverbed guitar run through the former track and is a widescreen epic; surely someone compiling the soundtrack to ‘True Detective’ season two must include this?

‘Neitzchean Love Theme’ is a twisted pop song in the best sense; a waltz of perfect pop sensibility and gloriously melancholy melody. Almost Smiths-ian in its beautiful shimmering jangle this track demonstrates yet another shade in Valentino’s palette of sonic colour and texture. ‘I Wish We Were Insects (Amsterdam)’ is a re-run through the album opener with added accordion to give it that extra Brel flavour. A shanty of enormous drama and swagger, the piano literally sweats regret and doomed hope over the song as increasingly deranged fiddle spirals the emotion higher and higher. Reminiscent of Mikelangelo And The Black Sea Gentlemen at their finest this is a sinister ballroom dance in Hades. 'Washed out World’ is a 60's Spectoresque teenage pop classic, albeit with some twisted and shadowy corners.

‘Bête Noire’ is a thunderous Mariachi trumpet led piece of perfection; tension and the risk of troubled romance only a heartbeat away. 'Sobborghi’s noir piano is truly thrilling; you can almost taste the rain soaked midnight streets, the chanson leading the listener into a world of broads, gin bars and danger. In contrast ‘Il Vino’ is a Scott Walker styled downbeat barroom melodrama, a shadowy tale reminiscent of broken hearts and stale smoke. ‘Ha Tutte Le Carte In Regola’s weeping accordion leads into a heartbroken Piaf-esque paean the likes of which Marc Almond would have been proud of in his La Magia days. Rumbling with tension and driven with sinister guitar arpeggios this song creates a twilight world all of its own. Closer ‘Sul Porto Di Livorno’ is a dusky and darkening late night cityscape; mournful trumpet accompanying crying cascades of piano and the loneliest, bereft vocal you’ll ever hear. A truly beautiful and affecting end to the album, its broken hearted yet defiant stance is a perfect summing up of the album's intent.

Available now as a double vinyl album with lovely artwork from the man himself or at Shiny Beat Music Mailorder.