David Gilmour's wife Polly Samson dropped a bombshell today when she announced on Twitter that a new Pink Floyd album would be released in October.

"Endless River" will be based on material originally recorded in 1994 during the Division Bell sessions. 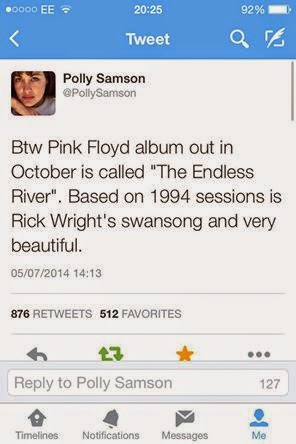 According to recording engineer Andy Jackson "Endless River" comes from "A bunch of jams from ‘The Division Bell” sessions that have had new overdubs done in the last year or so."

Durga McBroom-Hudson who appears on the album as a vocalist reveals "“The recording did start during "The Division Bell" sessions (and yes, it was the side project originally titled ‘The Big Spliff’ that Nick Mason spoke about),” she explained. “Which is why there are Richard Wright tracks on it. But David and Nick have gone in and done a lot more since then. It was originally to be a completely instrumental recording, but I came in last December and sang on a few tracks. David then expanded on my backing vocals and has done a lead on at least one of them."

An official announcement with more information is expected very soon.