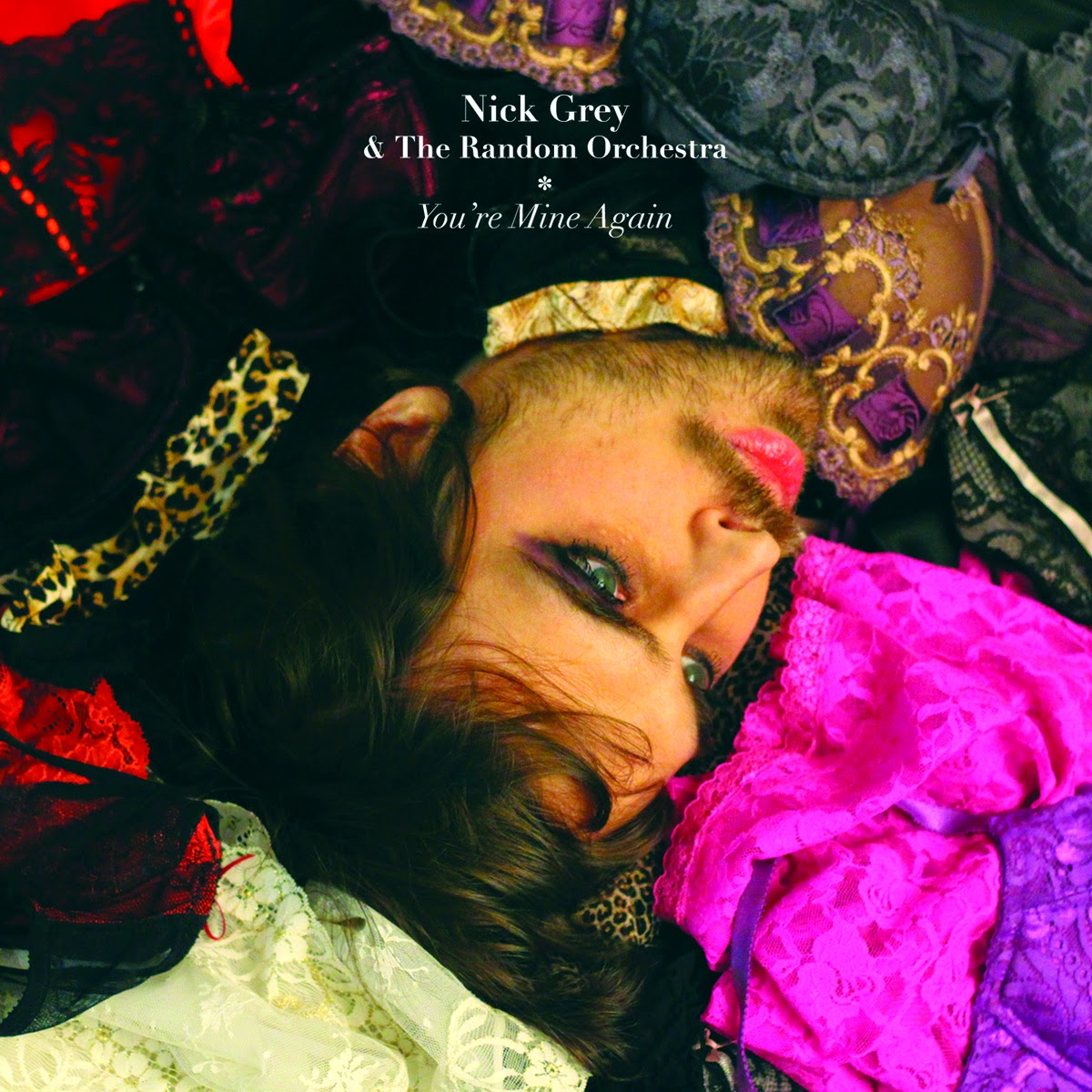 Enigmatic singer and musician Nick Grey already has an illustrious and varied darkly psychedelic back catalogue that ranges from the sublime suicide note of solo effort ‘Thieves Among Thorns’, includes his collaborations with such major figures as Charlemagne Palestine and Martyn Bates (Eyeless In Gaza) and which ventures into more avant garde territory with the 48 Cameras collective. His new opus ‘You’re Mine Again’, credited to Nick Grey & The Random Orchestra, side steps into yet further new territory. Featuring the singer resplendent in velvet and make up on the sleeve, this image immediately differs from Grey’s more abstract cover images and photographs and indicates something of a different direction with this outing. Indeed, the songs contained herein have more of a psychedelic classic pop bent, albeit with myriad twisted angles and dark corners. Although still very much recognisably a Nick Grey album (the brooding, melancholic lyrics remain), this is an exciting and courageous delve into the man’s finely honed songwriting and torch song sensibilities. The juxtaposition of experimental inclination and pop beauty is both thrilling and hugely rewarding. Appropriately, these decadent and twilight paeans to heartbreak do come with a warning; the sleeve advises ‘please do not play this record in a state of romantic agitation’.

Opening with the single ‘You’re Mine Again’, a brief burst of laughter leads into a rich tapestry of twinkling acoustic guitars, analogue synths and Grey’s distinctive and emotive vocals. Scrapes and wails build the tension as one of the most twisted pop songs this side of Antony and The Johnsons unfolds; Nick Cave and Marc Almond take note. ‘My Love Affair with Might’ bounces along on an OMD style vintage keyboard riff that is at once catchy yet also tense and affecting. The overall sense of sound and orchestration that is presented is massive; this is Nick Grey imagined by Spector and Trevor Horn. ‘Heart of the Glacier’ is a Berlin era Bowie-esque brooding masterpiece. The forlorn recitation of ‘the body is bound to age, ambition is bound to fade some more, the heart is bound to fail and love is lost’ is recounted over swathes of icy synthesiser. Reminiscent of previous Nick Grey works such as Candlelight Eyes in its sombre, cold stateliness, the track then skips through some interesting sidesteps into unexpected prog keyboard flourishes and an epic ending that wouldn’t be out of place on a Scott Walker album. ‘Structure And Faith’ introduces slide guitar and accordion to the bubbling electronics to create a dramatic and truly beautiful torch song. Hints of Human League and a smattering of The Legendary Pink Dots permeate into the analogue tapestry though this remains a unique vision and very much Grey’s own. The sadness at the heart of much of Grey’s earlier material is still strongly evident here; indeed the orchestra of synths and choral voices only enhance this aspect. Forget your Patrick Wolfs and Lana Del Reys; this is the real deal.

‘Wounded, yet Feudal’ is a guitar led cry in the darkest of nights; Ronnettes style drums adding to the doomed yet defiant palette. At times reminiscent of the best of Mercury Rev, at others the electronic elegance of John Foxx this record should really be being hailed as a classic piece of work by the glossy music monthlies. If it can be heard by enough people, it will be. ‘The Wasp Lover’ walks on an air of glistening and ethereal strings and is nearest song here in sound to Grey’s masterpiece ‘Thieves among Thorns’ (which if you don’t already own seek out immediately). Sophisticated and utterly beautiful in its resigned melancholy, the mellotron finale only adds to the timelessness and heartrending power of this music. ‘In The Ravine’ is equally epic and floats on 80s style minor keys and arpeggios to create a mini masterpiece of melancholia. Indeed this album is just that; an epic, lush and ambitious production crammed full of velvet draped and wet eyed perfectly formed vignettes. 'Death of the Dogman’s acoustic Americana alters the pace somewhat though its cinematic and dramatic tendencies fit perfectly in context with the album as a whole and simply add another string to Grey’s bow and another colour to his dark rainbow. A defiant and surreal Julian Cope-esque spoken endpiece reintroduces the synths with breathtaking style and emotional power. It’s a hugely affecting moment and there are many on this album. Never crassly tugging the heartstrings or going for obvious torch motifs, it is the unexpected dramatic twists and turns in Grey’s music and his vulnerable yet passionate baritone that makes this an album for late, candlelit nights involving too much red wine. Opulent yet damaged, the album presents an entirely new form of torch song; one that holds experimental and fiercely individual touches and yet also weeps over some of the most unique, human and truly alive music you will hear this year (or any year for that matter). ‘Enchantee’, as if with this in mind, returns to a more traditional French chanson to close the record, heartbreakingly sung by Sarah Maison.

This album cannot be recommended highly enough. One can also not pin it down in words or do justice to the sheer creativity and beauty contained here; you’ll just have to take my word for it. It is random at times, it is orchestral at others, it is Nick Grey through and through. Your life will be richer for owning this album; light a candle, pour another glass of your chosen poison and lose your heart in ‘You’re Mine Again’.

Available now from Milk And Moon Recordings in a beautiful gatefold CD sleeve or as a download from Nick Grey's Bandcamp site.