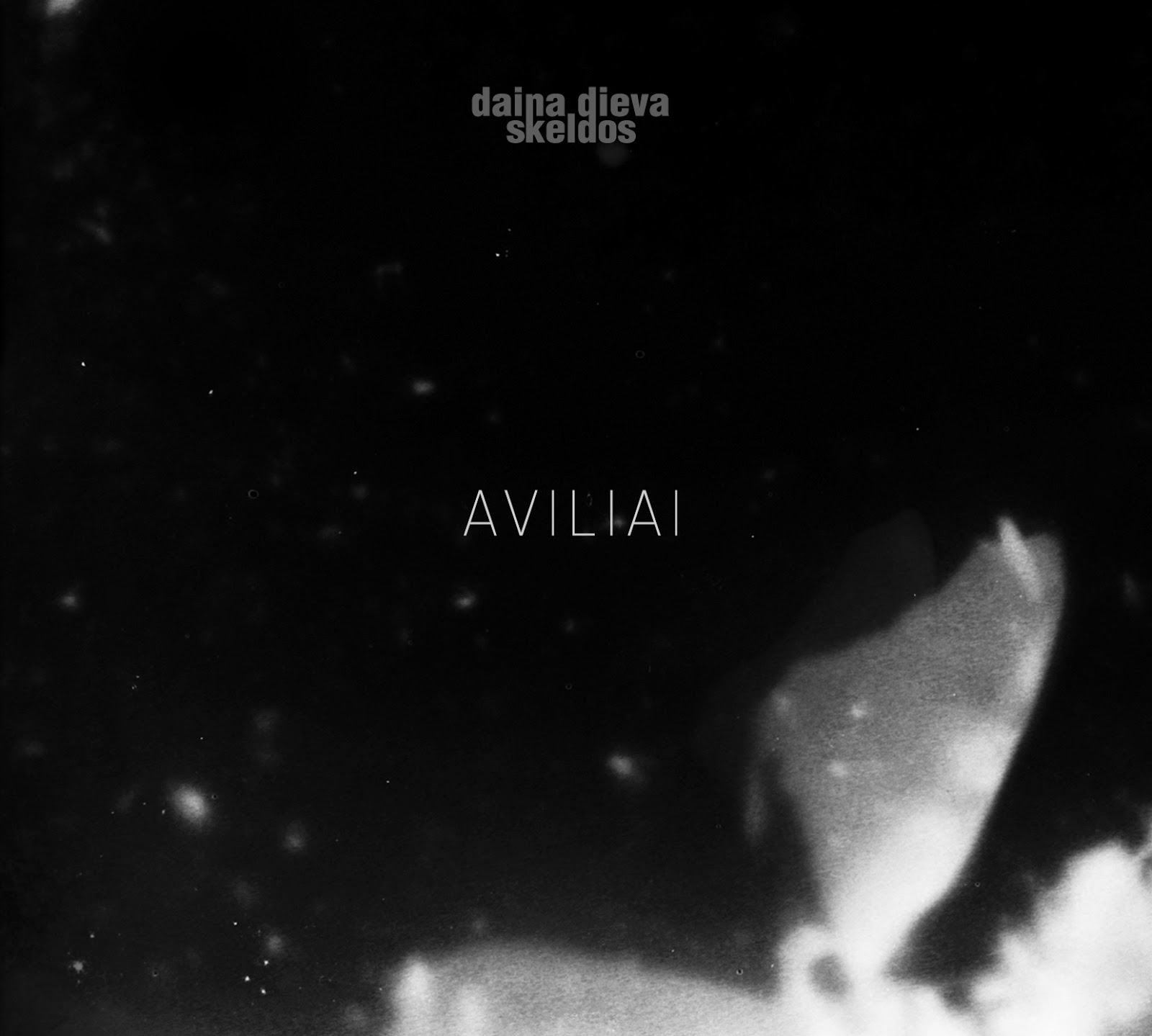 Out of the winter’s darkness comes ‘Aviliai’, a collaborative album from Lithuania’s Daina Dieva and Skeldos that by all accounts has been brewing between the two drone based experimental projects for several years. Described by Skeldos as being 'about a dream, which is being born while you fall into the sleep while surrounded by the branches of a tree, as if in your bee-hive. It is as if you’d walk though viscous sands that become endless seas, into the sound of the rain of moths. It’s a dream which needs you body-less. It’s a dream from which you can’t return.' Indeed this is an album that drifts enticingly, is at times shape shifting and formless whilst at others concrete and abrasive. The sounds contained herein are otherworldly, complex and with many layers and depths, certainly dark but also coldly beautiful. To call this album dreamlike then is an apt analogy. If the unconscious is a haunted house then this is the music that plays in its corridors.

Opener 'Sutemų' enters with a flutter from the silence before drone like strings hang in the air, shimmering like some ancient choir. Performance artist, vocalist and writer Daina Dieva, details her vision of the recording as '...all of those feelings and forebodings, dreams and nightmares unfold themselves and turn to sound'. This is truly what is conjured up; at once sacred and also unsettling; her vocals recall Lisa Gerrard and Dead Can Dance at their most solemn. Both beautiful and eerie, her voice intertwines and layers over each phrase like plainsong, yearning and incanting. There is something religious about this music; secular perhaps but still deeply spiritual. Hushed male vocals and the sound of a cello or deep bowed instrument adds a further stately grandeur, the glistening ambiance around the voices churchlike and reverberating. This is music for dark, late nights, for contemplation and time alone. It demands attention and quiet in its intensity. Aficionados of This Mortal Coil, Fovea Hex and Coil's ‘Moon Music’ period will find much to love here. Indeed there is something of Coil's ‘Solstice’ releases in the atmosphere created here. Foreboding and icy yet also frail and human, this music contains something both familiar and unknown; it is a modern folk music.

Second track 'Smėlio' (there are three substantial tracks on the album) begins with a harsher tone gathering volume as drones and sounds converge to create a dark monolithic ambience, like the orchestra of the subconscious playing as one vast string section. Voices enter through the haze, intoning and choral before drifting away as if reclaimed by the land of dreams. Dieva's voice, this time more urgent, rises above the growing black mass of noise creating genuine drama and tension. Reminiscent of some of The Moon Lay Beneath A Cloud's work this is a spine tingling moment. The drones then engulf the song, waves upon waves of static and guitar building upon itself. It is hugely thrilling, one can lose themselves in the sheer relentless noise washing over and over. If you liked Soundtracks For The Blind era Swans you will adore this. And then, suddenly, the sounds recede echoing into the ether, Daina's voice returning ghost like through the mass of electronics.

Closer 'Miego' begins with a church organ and chamber strings, the calm after the previous storm. Dieva's vocals enter, plaintive and emotionally wrenching and filled with a beautiful melancholy. This symphony of sorrow is minimal but sounds huge; a cathedral's worth of shimmer and reverb adds massive scale and sweep to the carefully drawn strings and echo. A litany of sorts, this is amongst the most gorgeous and genuinely moving music this listener has heard in a long while. I challenge you to not be affected by this. Finally, the track ebbs and retreats into the darkness, leaving only the spectral refrain of the strings. The dream ends.

Released as a 6-panel digipak in a limited edition of just 300, this album may prove to be elusive and underground but also deeply loved by those aware of its existence. You should be one of those chosen few. Ambitious, epic and yet also intimate and minimalist, this is something very special.