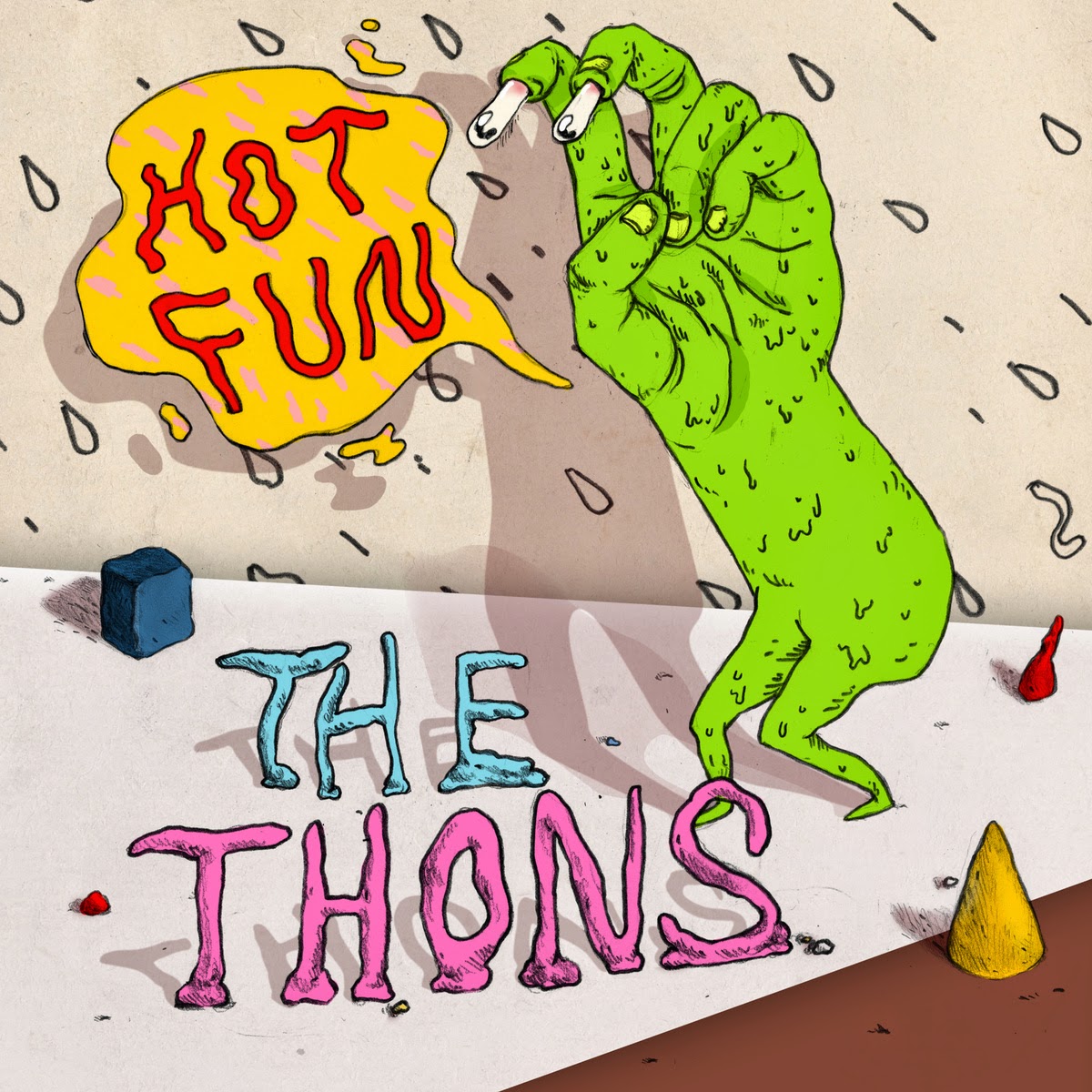 In 2014, a little band called The Thons released their second full-length album, Thirty Foot Snake. It was a raw slab of rock and roll that simultaneously recalled both the punk rock coming out of New York in the late 1970s, and also the early 80s response from UK bands such as The Fall and Gang of Four. It was ferocious and intimate at the same time, decidedly punk rock—but the playing indicated that there was something more going on, too.

On Hot Fun, the Chicago trio is digging a little deeper and showing the world what was bubbling underneath the surface. And it’s a little bit psychedelic.

The album opens with “Wooo,” a track so soaked in reverb that you can practically hear the springs bouncing. A surf/Dick Dale influence that there was no trace of on the band’s previous records takes front and center. It’s an opener that makes a very clear, very loud statement: the band’s sonic palate has been expanded.

“Lose Control” follows with an arrangement that frames Graham Onak’s half-spoken Mark E. Smith-like vocalizing with some great, angular guitar parts. Onak, a lefty, is an outstanding player with a southpaw’s skewed sensibilities. Here his instrument punctuates his vocal ejaculations with squeals of pain. Or is it pleasure? Maybe both. The surf sound of the first song has been twisted around on itself to resemble something like Television playing with Sonic Youth, under the spell of Syd Barrett.

“Being Me” introduces the record’s first real vocal melody, and it’s a good one. Here Onak belts out (ironically?) that “It still feels good to be me” with a ton of attitude. But, despite the apparent irony, it actually sounds like it does feel good to be him. It’s pure rock n’ roll joy that comes and goes in less than 2:00 as drummer Greg Bry channels Tommy Ramone, pounding out the beat with blistering speed while still somehow managing to groove.

And from there, the album keeps whizzing by: “Looking Out, Looking In” straddles the line between psych and punk more than any other song on the record, with Bry doing his best Keith Moon. “Feeling Alive” finds bass player Frank Thom’s fingers crawling all over the neck of his instrument, pumping out eighth notes and slipping them in to the spaces between the guitar and drums. Off-kilter and grooving all at once.

Comes the time to wrap the whole thing up, The Thons give us their most intimate offering. “He Lives” is reminiscent of Sonic Youth’s more-tender moments on Daydream Nation. It’s a lovely way to end the album, as gentle guitar figures, McCartney-esque bass playing, and a surprisingly touching lyric pull the listener in close to say goodnight.

The entire album flies by in less than 23 minutes: all punk rock energy, colored with a psychedelic flair. And while there are some excellent guitar solos, there is no hint of the blues in them; these songs leave no room for extended psychedelic jams. This record is lean and mean, with incredible playing turned in by all parties. And it’s all crisply recorded, with a haze of reverb blanketing the songs like a Peter Max paint job on a 2-seat muscle car.

Or, to use a different analogy: on their previous albums, the band served up a plate of meat-and-potatoes punk rock. This time, it’s meat and potatoes with gravy—mushroom gravy.

Anxiously looking forward to the next course.