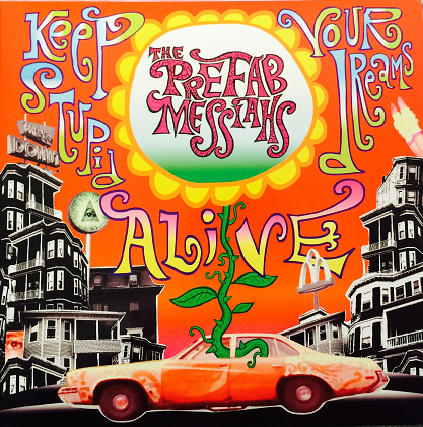 Massachusetts garage-psych good chaps The Prefab Messiahs return after a 32 year absence from the studio to show those young bucks just how it's done. A co-release between Burger Records and KLYAM Records, "Keep Your Stupid Dreams Alive" is a mini-album which few would have expected a few years back. Following a unanimously positive response to a recent series of reissues of their early eighties material, the line up of Xerox Feinberg, Trip Thompson, Doc Michaud and Ned Egg decided that a trip into the studio was in order. And unlike the majority of these reformation types of arrangements, "Keep Your Stupid Dreams Alive" is a raw, lively affair with none of the creeping malaise and raw nerves associated with 'getting the band back together'.

Doug Tuttle & Jesse Gallagher (some of those afore-mentioned young bucks) captured this on tape, doing an admirable job of ramping up the band's already considerable levels of weirdness. Some may suggest that these two are responsible for injecting some youthful vigour into proceedings, but I have my suspicions that they're simply capturing and manipulating the Prefabs doing what they do, the only way they know how to do it.

Whatever the process, the results are extremely entertaining. It's really 32 years since these guys were last in the studio together? Hell, these guys don't even sound like they're out of their early twenties, nothing tired about this.

"Keep Your Stupid Dreams Alive" is a loosely conceptual album, charting a Siddhartha ("Ssydarthurr") like journey inspired by the band's own early days, including plentiful references to their guru Bobb Trimble ("Bobb's Psychedelic Car"), whom I'm sure the majority of you are already big fans of.

Raucous garage psych pop is the order of the day - fans of more recent practitioners like Thee Oh Sees, Black Lips, King Tuff etc. will be right at home here, but these guys did it first. No need to respect them just for their pioneering qualities though, the songs themselves are irresistibly catchy too. "Ssydarthurr" is an early highlight with it's kooky, eastern influenced fairground organ putting the hooks in early on before album highlight "Orange Room" unfurls it's mysterious, creepy delights.
"Booshwa Sally" on the other hand is the Velvet Underground on L.S.D rather than uppers, and "College Radio" and the title track are out and out anthems.

This is one lively record. Due out in early March, you'll be able to check out a premiere of one of the album's tracks on our next sampler very, very soon. In the meantime, follow the Prefab Messiahs here for updates and pre-order opportunities.