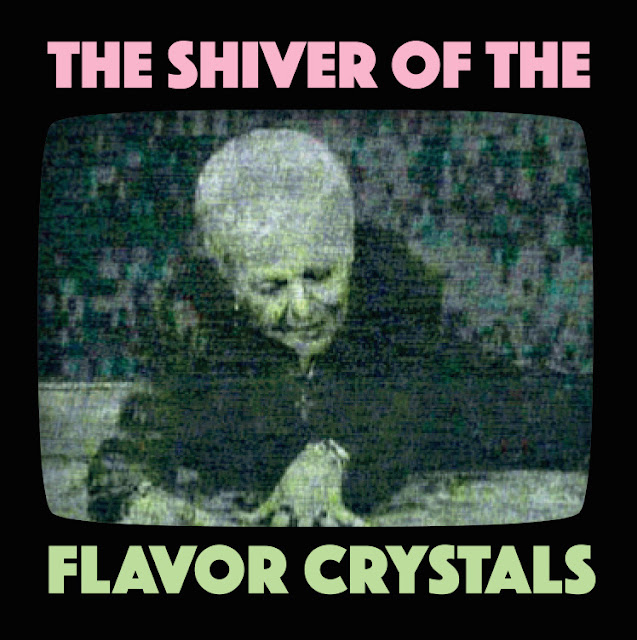 I can’t figure out why Minneapolis, Minnesota’s Flavor Crystals is a relatively new name to me, especially after several great releases and an opening slot for the Brian Jonestown Massacre in 2009. This month’s “The Shiver of the Flavor Crystals” is the band’s fourth album – and a double LP at that. Adding to my disbelief, they’re currently (at least, at the time of my writing this) among the top selling records for three of their Bandcamp tags – krautrock, psych, and space rock; I sincerely wish I could say I’ve been a fan for years. At least now I can say that I am firmly planted in their flock; I suppose it’s never too late.

In recent years, psych acts’ releases have become shorter on tracks, favoring longer songs. However, Flavor Crystals has taken a different tack, a sort of maxmimalism that only the strongest of bands could pull off. 2009’s “Three” was pressed on triple white vinyl and included bonus material, clocking in at just under 100 minutes. While “The Shiver of the Flavor Crystals” is only a mere thirteen tracks, the band’s sentiments remain the same; even the short “Rich Drunk’s Stereo System” provides a necessary slice of atmosphere before the noisy, frantic closer, “Wednesday Bloody Wednesday.”

Album opener, “Eyes Go White” stands among the strongest tracks on the release. Sprawling, dissonant, and lush, the guitar bleeds its riff over a commanding bass line and snare-based rhythm. Vocally, we’re dealt an airy, shoegaze-styled bit that, while buried of course, still adds a strong presence. “Bridge of Noise” takes up a motorik beat and swirling synths while the guitar wends every which way. After the experimental structure of “Medicine in the End,” the pop sensibilities of “Diamond Mine” (a David Kilgour cover) rise in stark contrast. While still possessing moments of experimentation, the heart of the song rests in the steady acoustic chord progression and almost – in the best way – sing-a-long chorus. While maintaining a strong grip on their sound, this time around Flavor Crystals have compiled a varied stretch of dreamy shoegaze and experimentation. One that comes in, for me, among the best this year – and it’s been a very good year.

“The Shiver of the Flavor Crystals” is available digitally or on double colored vinyl on their Bandcamp page.