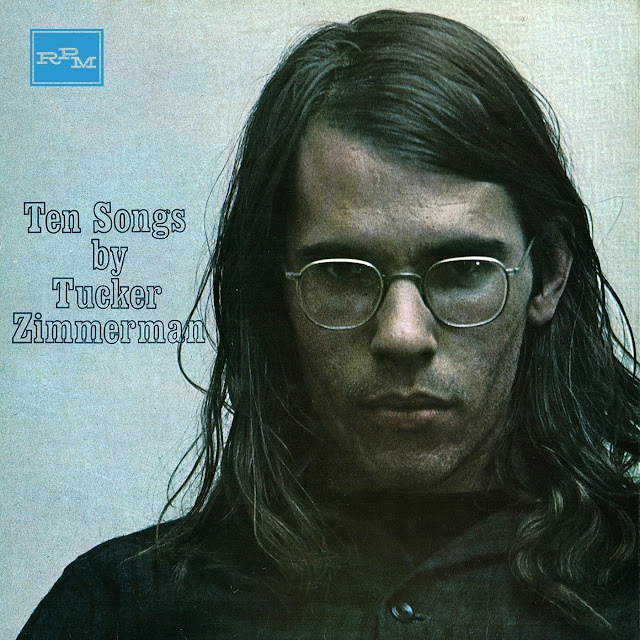 When David Bowie put together a list of his top twenty five albums for Vanity Fair in the early 2000s, there were a few obscurities amongst the more familiar items, one of which, "Ten Songs by Tucker Zimmerman", has just seen rerelease by RPM International. Elaborating on his relationship with the album, Bowie said "I always found this album of stern, angry compositions enthralling", and that "Ten Songs" had a "particularly telling effect on how I would collect and listen to music in the years to come".

Zimmerman was an American based in the UK at the time of "Ten Songs..." recording in 1969, and it's no surprise that Bowie was aware of Zimmerman, with Tony Visconti producing "Ten Songs" as well as playing bass, along with an impressive band that also included Aynsley Dunbar, Shawn Phillips, and Rick Wakeman. For those hoping that the Bowie connection might produce a similar work, there may be an initial pang of disappointment, but for those interested in the crossover point between expansive folk-rock and the burgeoning singer-songwriter movement, this is a fascinating and surprisingly diverse listen.

Often compared to Donovan, the songs on here are much grittier, more politically charged, and angry than anything I can ever imagine flowing forth from the Don's pen, and often quite rollicking. Opener "Bird Lives" makes the most of its Bo Diddley beat (and slyly references the Trashmen), while "Running, Running from Moment to Moment" sounds an awful lot like what might have happened had Buddy Holly lived to see the baroque pop era.

Elsewhere, "Children of Fear" channels Zimmerman's dissatisfaction with the state of his country into a terse, brittle rocker, with some impressively fiery bursts of sitar from Shawn Phillips adding emphasis.

It's on the more pensive, folky tracks though that Zimmerman sounds most comfortable. "October Mornings" and "The Roadrunner" are slow burning gems with a moody quality which hint at early Tim Buckley, with sympathetic, and understated arrangements from Visconti which suit the material perfectly.

There's plenty of bonus material on this new extended edition from RPM as well, including a number of foreign language recordings (of different songs) originating within the same timeframe, and best of all, pre-album singles "The Red Wind" and "Moon Dog" which are delivered with even more certainty than the album material. These two lost classics are almost certainly the most convincing items waiting to be discovered here, and elevate this new version of "Ten Songs.." from 'very good' to 'lost classic' status.