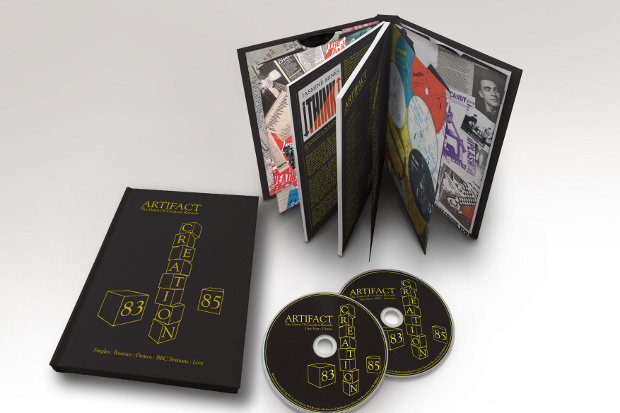 Cherry Red has just released this amazing five CD box set of early Creation Records singles. How does one review such a massive and excellent collection of singles and rarities? It’s hard to be objective with so much greatness for the ears to feast on. I guess my approach will be mentioning the highlights here, and there are many! But I’m getting ahead of myself. Creation Records was one of the greatest independent labels in the 80s and 90s, started in the post-punk era and evolving to define the Britpop generation. Formed in 1983 by Alan McGee along with Dick Green and Joe Foster, the label’s name was lifted from 60s band The Creation. The three were also in the psych pop band Biff Bang Pow! (featured here, of course), which is also the title of a Creation song. The label’s history is long and important, as was all the great music that emerged during this time period. Who among us doesn’t remember early singles from bands as varied as The Pastels and The Revolving Paint Dream all the way out to The Jesus and Mary Chain and Ride (who first appeared after the time period covered on this box)? So, on to the music! Disc one and two are all singles from this period, Disc three includes rarities and album tracks, Disc four is all demos, and Disc five is all BBC sessions. All told, there are 124 tracks here, and it will take quite a long while to sort through all this excellence.

So where to start? Disc one brings us a wealth of tracks from the likes of The Legend!, The Revolving Paint Dream, The Jasmine Minks, The Pastels, The Loft, and Biff Bang Pow! I was previously familiar with everyone here except The Legend! The Legend!, aka Jerry Thackray, emotes in a sing song voice which makes it sound like poetry set to music. The songs (‘73 in ‘83, for example) are odd and startling, and definitely hold your interest on repeated listens. And what about The Revolving Paint Dream? The band’s name aptly describes the flowery, Carnaby-flavored psychedelia they delved in. Witness the pretty, “Flowers in the Sky” or the classic, “In the Afternoon” for prime examples of their work.The fantastic Biff Bang Pow! offers up the Byrdsian flavored “Fifty Years of Fun”, which practically steals the riff from “I’ll Feel a Whole Lot Better”, but mixes it up with an almost punky edge. In fact, they remind me quite a bit of Medway band The Dentists! “Then When I Scream” also is fraught with Rickenbackers, but includes some groovy organ that wouldn’t have been out of place on a Doors album. And oh, The Jasmine Minks are a fun group. Their single “Think!” is cool and retro and has that neat guitar to jazz things up. “Work For Nothing” is cool jangle pop with a vocal that resembles Translator. I guess all these bands were mining the same musical influences! Scottish band The Pastels are awesome in all their lo fi tweeness and slightly out of tune but charming vocals from Stephen Pastel, such as the cute “Something Going On”. They are akin to equally enchanting groups like Television Personalities, though they are far more serious. “Stay With Me Till Morning” wears an obvious Velvets influence on its musical sleeve, and this is just fine with this listener. The X-Men channel The Cramps in all their swampy, psychobilly splendor. “Do the Ghost” and the other songs on here are all trashy fun. “Talk” sounds like something The Feelies might have recorded, if you could imagine The Feelies with a surf punk influence. And then we’re back to Biff Bang Pow! and their classic, “There Must Be a Better Life”. I hear Television in the mix of influences and this is quite possibly their best song. “The Chocolate Elephant Man” is also great ear candy. Other highlights include “Where The Traffic Goes” and “Mr Magic” from The Jasmine Minks, and the Go Betweens inspired jangle classic “Why Does the Rain” from The Loft. Whew, those are a lot of highlights and we have four more disks to explore. Hope you’ll stay with me as I listen through from end to end, which may well take my entire weekend.

So, what does Disc two feature? Well, the Mary Chain and Primal Scream for starters, along with The Bodines, The Weather Prophets, and The Moodists, along with some of the aforementioned bands. “Upside Down” from JAMC is surf punk infused with a ton of feedback and attitude. It brings you back to just how important a band these guys were and still are. And oh, their cover of Syd Barrett’s “Vegetable Man” is bristling with menace. While The Soft Boys’ version of this is the definitive one, this cover is still cool. And then wow, four tunes from the boss band The Loft, and I swear I hear Forster and McLennan and maybe even Felt swirling through, especially on “Up the Hill and Down the Slope”. Following this is the piano driven “Your Door Shines Like Gold”, the slightly dour “Lonely Street”, and the jangly “Time”. Primal Scream’s “All Fall Down” is far removed from the noisy psych they came out with later on albums such as “XTRMNTR”. It is mannered pop psych, not really what I remember about this band. “It Happens” reminds me of The Smiths for some reason. And then we have another pair of tunes from The Jasmine Minks, the energetic punky “What’s Happening” and “Black and Blue.” Australia’s The Moodists seem to have channeled The Doors along with some blues influences. Their song “Justice and Money Too” is fun indeed, as is “You’ve Got Your Story”. The Pastels kick out the jams (slightly) with “I’m Alright With You” and offer up the Velvets influenced “For What It’s Worth” as a counterpoint. The Weather Prophets (Pete Astor from The Loft) close out this disk with their classic “Worm In My Brain”, with some tasty slide guitar served up special for fans.

Disc three is all about the rarities and live tunes, including Alan McGee’s band The Laughing Apple.”Wouldn’t You?” has the same vibe that some of the Flying Nuns did back in the day. I believe they all have the same influences! We are also treated to an early version of “In the Afternoon” from The Revolving Paint Dream. The official version is better, but this is interesting from an historic perspective. “The Thirty Second Set Up” from The Jasmine Minks is swinging fun, and far too short at just over a minute. They also bring us the groovy “Somers Town” with some neat slide guitar. Biff Bang Pow!’s muffled “Waterbomb!” sounds like it was recorded with The Stones at the bottom of a well, which makes it uber fun. And JAMC drop their demo of “Upside Down” which joins the other musicians in the well, but one ups them with black clad, backs turned coolness. There is also an acoustic version of their classic “Just Like Honey”, where their Beach Boys influence is rather obvious. The noisy, experimental punks The Membranes give us “I Am Fish Eye” and “Gift of Life”, with all the requisite din and mayhem you’d expect from this genre. And woohoo, we have a cover of Love’s “Seven and Seven Is” from The Jasmine Minks. The trashy garage aesthetic is well played out here. And there is a really lo fi song from The June Brides (Phil Wilson) called “I Fall”. Then we have Jon Langford (Mekons) and his noisy group The Three Johns with “A.W.O.L”. Don’t expect Mekons smoothness, this is more like a swamp rock vibe more than anything. Later in the disk, Alternative TV sings the odd “Lonely Lenny”, followed by Dan Treacy and the Television Personalities with a live version of “A Picture of Dorian Gray”. They sound positively polished compared to the raw tunes that precede it. The TVPs also offer up the live tracks “The Dream Inspires” and “Family Affair”.

Disc four features demos from band such as The Jasmine Minks, Biff Bang Pow!, and The Moodists. Starting up with “All Fall Down”, the psych pop of “Work”, and the jangly “Second Post”, and moving along to the amusing “Boredom (Is)” from The Legend!, this disk covers a wide variety of styles. Meat Whiplash’s awesome “Losing Your Grip” sounds like a radio station flickering in and out before it settles into a heavy garage groove. “Always Sunday” carries a heavy Velvets influence, and “Walk Away” is neat surf rock. I also like The X-Men’s peppy “Home”, which almost sounds like a Monkees outtake. And back to the Minks for “Mr. Magic” (excellent), “Friends”, “Choice”, and the laid back vibe (with trumpet) of “Everybody’s Got To Grow Up Sometime”. We also are treated to some rough sketches from Biff Bang Pow! of “Lost Your Dreams” and the trippy “I’m Okay Me”.

Disc five is a combination of John Peel and Janice Long BBC sessions featuring The X-Men, The Loft, and The Bodines, among others. The X-Men throw down the garage psych tune “The Witch” and the Syndicate of Sound cover “Little Girl”. Both are fun and very cool. The Loft once again reminds me of the Go Bees with their sessions with Janice Long that include “On a Tuesday”, “Skeleton Staircase”, “The Canal And The Big Red Town”, and “Lonely Street”. This session dates back to 1984 but sounds like it could have been recorded yesterday. The Peel Session with The Moodists has vocals on “Other Man” that sound like Greg Sage, and “Justice and Money Too” has some nice chunky bass lines. The Bodines have fun in a Janice Long session with “William Shatner”, who’s been the subject of numerous songs. And rounding out this disk are a quartet of live tunes from The Loft, including my favorite “Worm in My Brain” and the closing track “Up the Hill and Down The Slope”.

This box set is an exhaustive treatise of the ‘83-’85 era of a classic British label. Given the sonic treats here, this release will provide many happy listening hours for completists or people interested in this awesome time period of British rock.