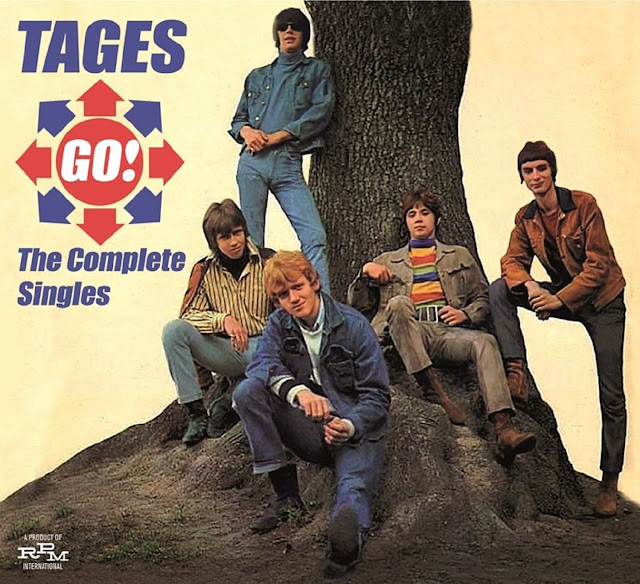 Tages were one of Sweden's most popular bands in the sixties, but these days they're remembered by most solely for their Sgt Pepperesque 1967 album "Studio" (recorded at least partially at Abbey Road I believe). Now that's not a pretty great album to have to your name, but there's much more to Tages than this - five albums, and more importantly a prolific run of excellent singles, which RPM have collected on this illuminating two disc set. Forty nine songs in total over two discs, their complete A & B sides, as well as several previously unreleased alternative versions, all presented in glorious, punchy mono mixes.

Their earliest recordings reveal a group in thrall to the Beatles - what band wasn't in 1964? - but right from the get-go with debut single "Sleep Little Girl", the songwriting was a step above the competition, and this wasn't to change, despite a gruelling release schedule over the following four years.

Tages changed with the times, closely following what was happening in the UK scene of the time (with a slight time lapse), moving from tough beat with an unmistakeable Mersey flavour, through R&B and mod, to ambitious psychedelic pop, exemplified by "Fantasy Island" - featured twice here, in its original form, and in a rare alternative version. There's the odd unnecessary cover; "Friday on My Mind" is almost identical to the Easybeats version, and no one needs another white beat version of "Dancing in the Streets", but these few fillers aside, the quality meter doesn't take a significant dip at any point, even on the backend of the second disc, which concentrates on the alternative versions, and singles of older material released by their previous label Platina, when the group signed to Parlophone for their excellent psychedelic era recordings.

There are obvious, and commonly cited influences at play here - the Beatles, the Small Faces, the Yardbirds - but the legacy presented on "Go!" suggests that had they secured competent international distribution they'd perhaps be viewed as peers now, rather than followers. "Studio" should still be your first call if your curiosity has been piqued, but for anyone interested in the road that led to that minor masterpiece, this is exceptional listening.