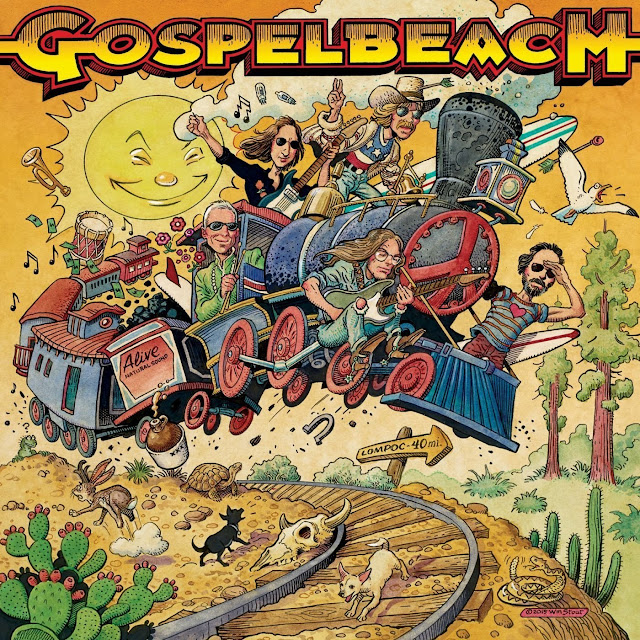 The idea of the supergroup isn't a new one, and it's one that more often than not leaves a lingering aftertaste of disappointment and inflated egos - "look who wants to be in a band with me!", rather than "look how good our material is".

There's always an exception to the rule of course, and the casually at-ease excellence of GospelbeacH's debut goes a long way to righting the wrongs done by so many others. The success of "Pacific Surf Line" can be attributed to a number of things, but the lack of ego apparent here is certainly key. I'm sure that GospelbeacH don't consider themselves to be a supergroup at all. They're just a bunch of friends that happen to have impressive musical back stories involving Beachwood Sparks, Ryan Adams and the Cardinals, Chris Robinson and the Brotherhood, and a handful of less well-known, but equally rewarding bands. And it's obvious that they all have a great time when they get in a room together.

Chief Beachwood Spark Brent Rademaker is a dominant presence here, so it's no surprise that that band's vibe permeates, but this is much more than a case of Beachwood Sparks Mach II, with everyone else on board providing valuable contributions that give this the sort of communal feel that you'd associate with the vintage San Francisco scene. In fact, the two records I'm reminded of most while listening to this are "Workingman's Dead" and "American Beauty", albeit with a whole lot more jangle, and a much more aggressive guitar attack when Neal Casal dials up the gain for some surprisingly epic solos.

But it's all about the songs really - they're what kept me coming back to "Pacific Surf Line" over and over again. The easygoing lope and sunny harmonies of opener "California Steamer" will ensnare you immediately, and by the time the chorus hits, there's no escape. Rather than an early peak though, "California Steamer" serves as an indicator of the quality of "Pacific Surf Line"s contents, with not a weak moment to be found, despite the easy-going nature of the material which gives the impression of being totally off-the-cuff, which is surely not the case, given the memorable nature of the many, many hooks here.

A perfect Summer album really - unfortunate for those of you just losing your warm season, but perfect for those of us down under who're just starting to see more of the Sun. Certainly those who have enjoyed albums that we've championed in the past from the likes of Konitiki Suite and the Greek Theatre will find much to be enamoured with here.

CD and vinyl available here (US), or here (UK/EU).