Much loved Oxford shoegaze band Ride has been hitting a lot of high marks lately with extensive touring in the US and Europe. They have definitely improved with age over 25 years, though they’ve always been a great live band, as evidenced by the soon to be released "Nowhere" 25th Anniversary Box Set. A never before seen concert DVD is included in this special edition of "Nowhere", set for release on November 6th. Shot back in 1991 by James Deegan at The Town and Country Club, the footage sat in film cans and remained unseen until it was converted to digital this past summer. The audio was mixed by Mark Gardener at OX4sound Studios and the film footage was edited by Matt Levin in Washington, DC. Matt kindly agreed to a Q&A about the project. 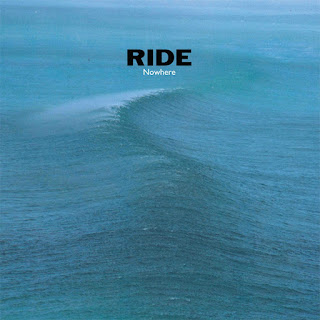 How and when did you first meet Ride?

MATT: I first met Ride in April of 1991. I was going to college in Eugene, Oregon, and I was a huge fan of the band when they first came onto the scene in the UK in 1989. I was friends with this woman there named Gina Harp. Gina was a music journalist and like me, she was a massive fan of Ride and all the big shoegaze bands of the time, My Bloody Valentine, Slowdive, Loop, etc. She went over to England and became the first American journalist to interview Ride. There was no Internet back then, she did this all with reaching out by snail mail and telephone. So Gina made this connection with them and their manager, Dave Newton, who’s the greatest guy, and she hooked me up to film them on their first U.S. Tour. I remember the first time I actually saw them, I walked into the Cattle Club in Sacramento, CA while they were soundchecking, and I think they were doing Seagull from the Nowhere LP and it gave me chills. All in all, I filmed 5 shows back then. Sacramento, San Francisco, Palo Alto, and two shows in LA. We also filmed an interview with Andy and Loz in SF that Gina conducted. In LA, where I grew up, I drove Andy and Loz around town, took them shopping for jeans for their girlfriends at the time, and really had a blast hanging out. Tragically, about 5 years ago, Gina passed away from ovarian cancer. She was an amazing woman, and without her, I never would’ve met Ride, so I dedicate the concert film to her memory. It makes me sad that she’s not around to see Ride’s reunion. I think she would’ve been thrilled that they were back together again. By the way, if you were wondering what happened to my footage, it was all shot on Hi-8 and over the years I moved around, and those tapes weren’t labeled correctly(the stupidity of youth). The good news is, I have all of the tapes, and I have found a tiny bit of the footage. It’s all there in a box of hundreds of tapes, so I just need to find it all! It’s a time consuming task, but obviously that footage is precious, so I will continue to look for it! I know it’s a cliché, but there just aren’t enough hours in the day!

How many Ride shows have you had the privilege of seeing over the years?

MATT: I saw 6 shows in 1991, the ones I filmed, plus a show at the Roxy in LA where they wouldn’t let me film. Then I saw them once in Seattle in 1992 on the Going Blank Again tour with Slowdive, which was amazing. Then cut to this year, I saw them in Brooklyn where I reconnected with them. Then I saw them here in DC (where I live) last month, and also saw the Philadelphia show, so I guess that makes the grand total 10!

How special do you think the show at Town and Country Club is compared to others you've seen?

MATT: Well, I wasn’t there in person, but I think the T&C show was/is very special indeed. Ride are from Oxford, and this was a London show which is always a big deal, kind of like a New York show is in the States. Nowhere had come out only a few months earlier in October of ‘90. So they were on top of the world at this point, in their prime and full of youthful energy. They played their hearts out for this show and the proof is in the pudding as they say. It sounds amazing! Even though I wasn’t there in person, working with the film footage, it feels like I was! And that’s how I want people who see it to feel about it.

The band was impressive live back then, just as they're amazing now. The only differences are the haircuts and the number of guitars they use now. Even the crowd back then reminds me of the crowd I saw back in June. What differences have you observed?

MATT: Haha, yeah the hair is a bit different now, isn’t it? Well that happens to all of us when we get older, right? You’re right, Ride have always been an incredible band live, and I think they still are. It’s amazing that they still have the energy to do what they do live. I noticed as well that they seemed to play many more different guitars back then, but I think with modern technology, they can get the sounds they want from fewer guitars. That’s just a guess. But in general I would say they’re probably technically better musicians now, but you cannot replace the exuberance of youth! I think part of it for me is that I’m about the same age as Ride (mid 40’s), so when I saw them in 91, I was a kid as well, and I could just relate to them. Similarly, now they’re all fathers, and I became a father last year as well! So we have that in common.

When did you first become aware of this concert footage? Did the band tell you about it, or were you a friend of James Deegan?

MATT: So here’s what happened. You now have the backstory of how I originally met them in ‘91. I wasn’t in touch with them for over 20 years. A couple of years ago I became Facebook friends with Loz, and when I saw that they were reforming and playing a show in New York, I inquired about filming with them again. He got back to me and said that he wasn’t sure about filming at the venue, but he said Andy had an idea he wanted to film in Brooklyn, and would I be interested? I had no clue what they wanted to do, but I didn’t care, I hopped in my car and drove to New York, knowing it would be a Ride adventure at the very least. The crazy thing is they had two flights cancelled out of Barcelona, and they almost didn’t make it to the venue at all! I was all set up in New York, and thought it all might be for naught. But they finally made it to the venue and were still up for filming! I learned then that their idea was for Andy to drag an old Vox Phantom guitar by a long guitar cord, sort of like he was walking a dog. It really turned out well. We had two cameras on Andy, as well as a GoPro on the guitar itself for Guitar Cam! My friend Bryan, also a filmmaker, happened to be in town, and he helped with the shoot. I put together an edit, and the band liked it a lot! About a month later, Loz got in touch and told me about the T&C show, and asked me if I would consider editing it. I jumped at the chance! I worked closely from that point on with Dave Newton. I did an initial edit for the track “Dreams Burn Down”, and they liked it a lot, and then we agreed that I would take on the whole project.

Please describe how the film was shot, both the medium used and the equipment James used.

MATT: I’ve never met James Deegan, but from what Dave told me, they hired James to film the show, and he shot it with 5-6 cameras. Two 16mm color, and 3-4 Super 8 black and white. I’m not sure of the specific types or brands of cameras they used. The 16mm had a close-up and wide shot, and the Super 8 was a little bit of everything, cameramen running around trying to capture different shots.

What was required to clean up the footage?

MATT: It was a very challenging edit. I faced many obstacles in putting the footage together. First and foremost, there was no sync sound, or sync track to work with. Just silent film footage that had been transferred to video. Today with timecode and a sync track, it’s a breeze to sync audio, but I basically had to lip read the songs silently, figure out which songs they were, and then manually sync them up. It was very time consuming, but worth it in the end! My assistant editor, Kevin Fetta was a huge help and did a terrific job sifting through and helping me catalogs all of the footage.

The other obstacles I faced were that on many of the songs, at least one of the main cameras would be zooming in and out for the duration of the song! Maybe that was popular in 1991, but it’s super annoying to try to edit with! So I basically used other shots where I could, and then I used some effects, like slow motion, to make those zooms not as jarring. Sometimes the zooms worked as they were, but it's always better to add that in post-production rather than be forced to use it on an edit. Lastly, some of the camera shots simply weren’t present for some songs. Either the reel had ended and they missed part of the song, or they just didn’t have coverage, so it made piecing the whole thing together a bit of a puzzle, but it all came together in the end!

What was the band's first reaction to seeing this footage?

MATT: I think when they finally got the film transferred to video and saw the footage, they loved it! They just needed someone that was an editor and also familiar with their work, and they thought of me!

What are your own impressions of the quality of James Deegan’s work?

MATT: I think that he did some great work on the initial shoot. I think that film is much warmer and richer than video. I think the tactile quality of film really draws you into the show, as opposed to video which is often so clinical and cold looking. I did have some great shots to work with, at the same time, I could’ve done without all the incessant zooming in and out, and the lack of some angles, but I made it work, and ultimately was able to turn it into a cohesive concert film.

Might you collaborate with Ride again in the future?

MATT: I’m very excited to say that in a just a few weeks time, we’re going to be filming Ride in Portland, Oregon. It’s going to be a massive high tech shoot with multiple cameras and gear.

The 25th Anniversary edition of "Nowhere" will be released November 6. You can pre-order it here (UK/EU), or here (US).

Here's a preview track from the DVD: