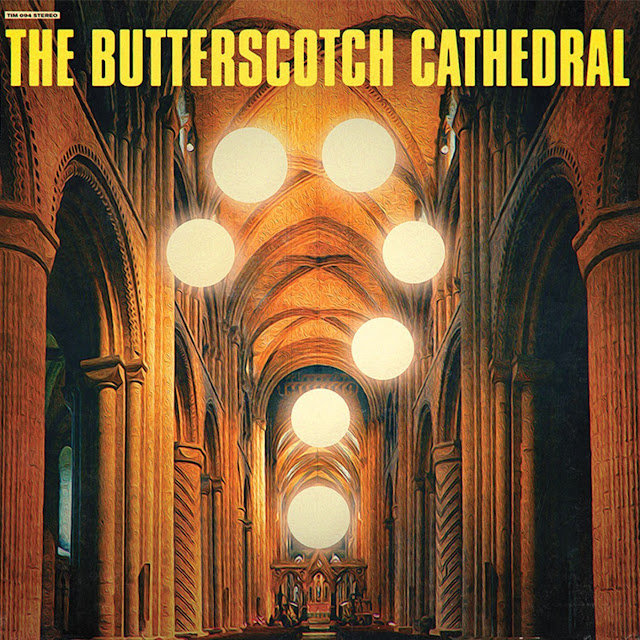 It’s not every day that an album lands in my inbox that contains not one, but TWO multi-movement suites, especially one as accomplished and assured as The Butterscotch Cathedral’s self-titled debut. So I guess that makes last Tuesday not just any day.

The first of the two long suite takes up the entirety of the first side of the album, and is titled, appropriately enough, “Side A.”

“Side A” begins with a chorus of elaborate vocal harmonies: “We’re going home again…” the band sings as a greeting, as modular synths weave in and around a frantically strummed acoustic guitar and layers of vocals. Fuzz guitars and other sounds also present themselves as the mix builds and wanes. Intricate, densely layered arrangements give way to a pretty fingerpicked acoustic guitar instrumental, which then winds its way into some psychedelic power pop that foreshadows the sound of the second side and floats along on a bed of… everything, until it fades away, ending the first suite.

It’s a helluva introduction and as bold as bold can be. And even as a listener with A.D.D, it all moved along so seamlessly that I barely noticed the 18-minute run time.

Side 2 opens with the big fuzz guitars and tom-heavy rhythms of the 2-minute “Loud Heavy Sun.” Perfectly sequenced to provide a break between the 2 long suites, it’s the aural equivalent of a thick line drawn in the air. “SIDE ONE ENDS! SIDE 2 BEGINS!”

The second suite, “Lisa’s Dream,” is the psych yang to the prog yin of “Side A,” with B-3 filling in for where there once was synth.

The piece (there’s too much there to call it a “song) opens with a mandolin flourish and maintains a light psych pop sound for the first 5 minutes or so. But then the Dream gets dark, as melodies get trapped in some “Revolution #9” moments; sound effects dart in and out; and 5-part vocal harmonies are manipulated by studio trickery to sound like they are being sucked into a aural whirlpool. And then… POOF! The song gently emerges on the other side of the chaos, and the journey is complete.

Okay, so it’s not something that you can add to your “Shuffle,” but it hardly matters. Both suites flow seamlessly, their movements linked by composed musical transitions and sound effects. It’s a truly psychedelic record that demands multiple listens.

Good thing that listening to it is such a joy.