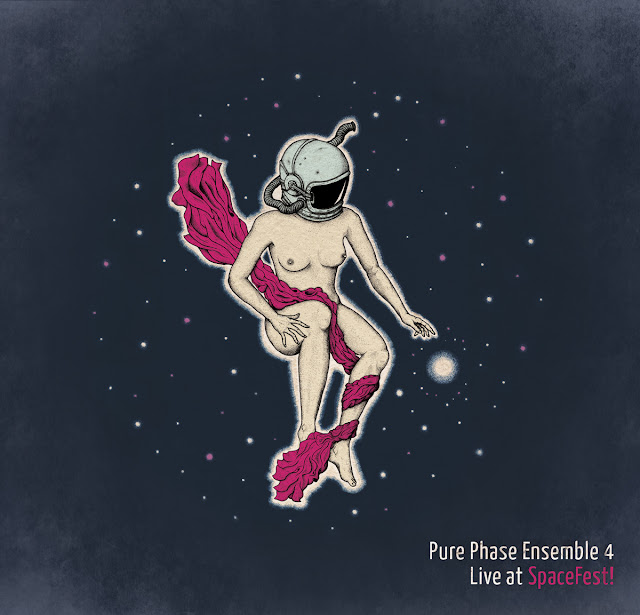 From the press release:

Pure Phase Ensemble is an international music collective, created especially for the SpaceFest festival in Gdansk, which takes place annually in December and is organised by the Nasiono Association. The city of Gdansk plays host to this blossoming music festival each year in the first week of December, at which time numerous select musicians from Poland and abroad gather to take part in a special workshop series. They collectively compose a concert's worth of music, which they then present live to the festival-goers. Each year, this unique performance is recorded live and subsequently released as an LP.

The programme for each workshop is jointly curated by Ray Dickaty, a British saxophonist improviser and former member of Spiritualized (1997-2002), and Karol Schwarz (KSAS), who also manages Nasiono Records. Along with these two key figures, every festival involves a new musical director - a legendary, internationally recognised musician, who is invited to co-curate the workshop.

"For me, this it interesting - it's perfect because it reminds me in some ways of how some of the early Ride songs came together... I didn't come in with a script, nor does Ray. There is no pre-work on this. It was just completely spontaneous," explains Mark Gardener. "Sometimes music like that is good before things get thought about too much and worked on too much. That can kill the energy sometimes. Of course some things have got to be worked and developed, but in this scenario, with such little time and to get an interesting set together, I think it's been good to keep it fresh and not over-worked."

Albums are about building a mood. Live albums are usually a random set, designed to keep people watching. Pure Phase Ensemble 4's Live at Spacefest is about the former while achieving the latter. It's rare that I feel like I am actually at the concert while listening to a live album, but this mix takes me there and the changing moods of the tunes expertly guide me along with the band on this space journey.

Kicking off with a four minute intro, you can hear the crowd settle in for a cosmic journey. All of the pieces of the ensemble edge in on top of layers of pleasant drone. It envelopes you and reminded me of sitting on the hood of my car, watching the stars on a fall evening.

This then builds straight into "Morning Rise", as the horns build and the "song" emerges into a dreamy number that swings the beat just enough to keep you swaying. At eight minutes, there is plenty of room to patiently build up to the vocal line that comes in like a chant, which rolls in for a bit and then wanders off as the guitars stack peaceful melodies. The vocals return as the whole piece builds to a very satisfying end.

"Notaki" blends into the set, and a motorik drum pattern emerges to steady the song into a hypnotic mesh with one voice repeating a line while a second speak-sings. Out of the din comes a flute adding additional melodies and before you can focus they turn it off with a great breakdown that tricks you into thinking the song is over, but don't be fooled! We are only halfway through a fifteen plus minute jam. Turn up the guitars and soar into space as the band picks back up and continues the drive.

"Zostan na noc" is next and now that the band is warmed up we get some fuzz bass, distorted guitar and heavy sax, which comes across as a siren warning you to beware. But right when you think the song is going to go explosive it eases into another great, slow groove with female vocals, as the synths and sax take turns weaving in and out.

"Peter Song" has a captivating pizzicato bass line that makes the song from the first bar. It slows down the pace but doesn't lose momentum. "Doing My Head In" dreamily appears, with interlocking guitars and piano which add a nostalgic touch with a very catchy vocal melody on top. "Happy Dancing Woman" wraps up the set nicely as the pace picks up, and this is a great example of a feel good song which still feels emotionally deep and avoids any sappy sentiment. What a great way to send the crowd home fully satisfied.

Check it out here: