Haleiwa - Palm Trees of the Subarctic 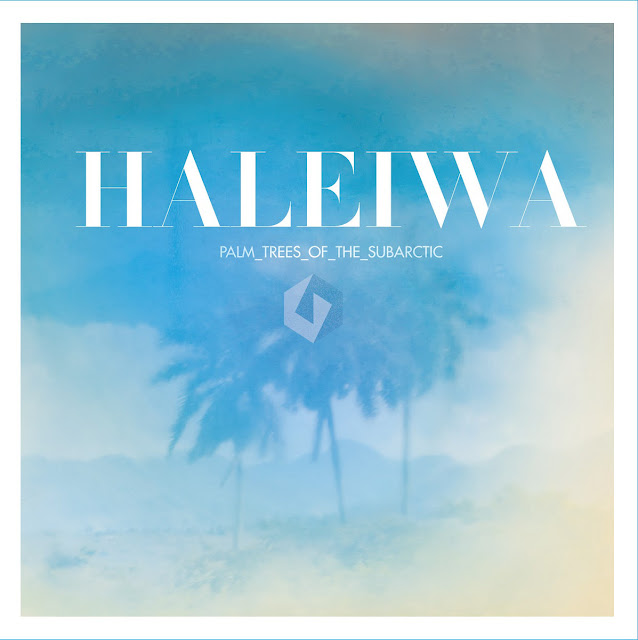 Autumn time up here in jolly old England is one of my favourite times of year. The leaves are turning brown and the sunlight has a quality and beauty that you only get when summer gives way to fall. Into this splendid reverie strolls a peach of a record from Stockholm songwriter and composer Mikku Singh, the artist also known as Haleiwa, who has just released his second solo outing. "Palm Trees of the Subarctic" on Forte Records.

The timing of this record dropping is great for me as many of its moods really reflect the essence of this time of year, but its so good that it could drop anytime and make the same play for my affections (and win). The title of the record is informative with it's literal suggestion of contrast, transition, and a slightly more hidden but detectable subtext of love and a search for satori. Thankfully these lofty objectives are matched sonically with a collection of songs that exude warmth and optimism.

Opening track 'Setting Sails in Kae Na Point' is a perfect marriage of 'Bryter Layter' era Nick Drake and Hawaiian psych-folk mysteriosos These Trails (who's sole record is a must listen for any Active Listener) and sets the tone for many of the expertly performed and lovely instrumentals on this record. But don't get too comfortable as the next track "Wall of Blue Sky" (issued by arch tastemeisters Sunstone Records as a 45 a while back) veers off sharply into indie dream pop territory underpinned by a solid motorik beat - not a million miles away from fellow Swedish favourites of mine , The Radio Dept or even dare I say it echoing the early output of Orchestral Manoeveures in the Dark (Hey! They were cool!). Anyways, its beautiful and provide a lovely counterpoint to the opener. Back the pendulum swings into 'Epic Days' which features some tasteful acoustic guitar picking with a spectral synth providing wispy clouds of accompaniment. Needless to say, it's totally gorgeous. "Emergency Exit on Fire" moves back across the hall into floaty pop sensibilities driven by a rolling sparkly guitar motif that could easily have made the cut for the latest offering by Swedish compatriots, The Amazing. And so the pattern is set as the record continues on its restless, beautiful path, endlessly counterpointing itself with an assuredness and commitment to excellence that gives credence to the claim that the final selection of 10 songs for this release were hewn down from 40 potential candidates recorded over several years. For every contemplative and autumnal instrumental contained here there's a dazzling, breezy song around the corner. For every palm tree...

By the time journeys end arrives with the closing chimes of the delightful "Acai" (not accidentally titled you suspect given the little berry's well-known health enhancing properties) you are refreshed and ready to either get out there into the wider world and do a little good or get up and put the darn record on again (before eventually going out into the wider world and doing a little good). It's that type of inspiring record and you will probably want it in your life on a fairly regular basis.

I would imagine those who hear "Palm Trees of the Subarctic" will be compiling it in their end of year lists for best record of 2015, it really is that good. Only 250 people will have the pleasure of hearing a vinyl copy so move quickly if you want to be one of them. I just pulled the trigger myself, sometimes only physical media will do and this is one of those times. Mikku Singh in whatever guise he chooses is clearly one to follow.

Haleiwa by the way is an actual place. In Hawaii. I found that out on the internet. Like I found out about this record on the internet. Open your windows, let the light flood into your living room and get acquainted with Haleiwa. It's the time of the season for it.