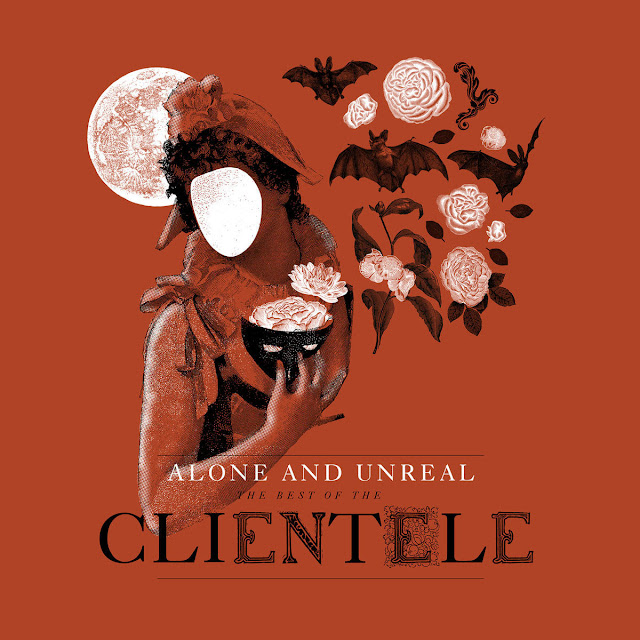 Wistful, breezy and literate, the Clientele created a near-perfect run of albums and EPs between 2000 and 2010, before effectively disbanding in July 2011. Fuelled by the whispered visions and reverb-drenched guitar textures of their poet-in-residence, Alasdair MacLean, the band created an instantly recognizable sound that became as synonymous with autumnal reflection as anything in Van Morrison’s canon. How many bands in the modern rock era could claim to have defined their own unique sound, let alone boast a consistently progressive and distinguished body of work?

If you missed the Clientele during their heyday and aren’t really sure whether you want to become a regular – er, client – then Merge Records’ 11-song collection is surely the way to go. Arranged chronologically, and featuring at least one selection from each of the band’s five albums (plus one gorgeous bonus track, “On a Summer Trail”), Alone & Unreal stands as a gentle reminder of – and sublime testament to – the simple joy to be found in a succinct, well-picked career overview. Indeed, in an era when the lavishly packaged, super-duper deluxe box set posits an excess of pointless trinkets as an attempt to capture the essence of a band’s legacy – in the form of musical barrel-scrapings, accompanied by towels, coffee table books, scarves, buttons, tea cozies, etc. – this collection hearkens back to a time when entire eras could be defined by a concise collection.

Elton John’s Greatest Hits (released in 1974) took the listener on a wild, glittery ride through an impeccably chosen selection of power ballads, sensitive singer-songwriter musings, stadium-ready rockers, jaunty ‘50s throwbacks and vivid character studies – and miraculously, still managed to create a coherent, bullet-proof, standalone career summary. Its significant impact has, of course, been dulled by an endless series “definitive” compilations and box sets in the years since, some of which contain sub-par material used as enticements for completists – B-sides and the like – but it will always remain one of the best collections of the rock era. It flowed together so well that it took on its own personality: it became its own 10-song statement, not an advert for the five motherships from which it was culled.

Similarly, Alone and Unreal reminds us that we don’t need to overwhelm with content to impress. Sometimes less is definitely more. And so we begin quietly, with “Reflections After Jane,” a breathy, windswept version of the Velvet Underground’s “Sweet Jane.” “We Could Walk Together” and “Missing” feature the kind of hypnotic guitar arpeggios that would become a staple of the band’s sound; while “Since K Got Over Me” represents a slight toughening of approach (this mysterious person known only by one letter is referenced in another song from 2005’s Strange Geometry, “K”). From the same album, “(I Can’t Seem) to Make You Mine” (not a cover of the Seeds’ classic) shows a new depth and maturity. This is eloquent and beautiful chamber pop at its very best. Swirling guitar lines echo through the lush strings like a leaf blowing in the chilly October air, while MacLean’s vocals in the chorus evince startling vulnerability. If this track doesn’t reel you in, nothing will.

All of the tracks are winners, but special mention must be made of “Never Anyone But You,” from the band’s final full-length LP, Bonfires on the Heath. In what is perhaps their single greatest achievement, MacLean delivers plaintive eulogy that speaks to the palpable effect and influence the dead wield over the living. It is drop-to-your-knees moving, and one of the finest songs of the last 20 years.

Look, you don’t need a 4-CD box set filled with tedious breakdowns, false starts, studio chatter and inferior alt takes to get to the essence of a band. Sometimes it can be done over the course of a simple sampling. Elton proved it in 1974, and the much-missed, never forgotten, Clientele prove it in 2015. Brevity is belief. Tea cozies not included.

Note: On October 23, 2015, the Clientele will be reforming for a one-off show at Islington Assembly Hall, London, UK, to celebrate the release of Alone & Unreal: The Best of the Clientele. Details at www.theclientele.co.uk.