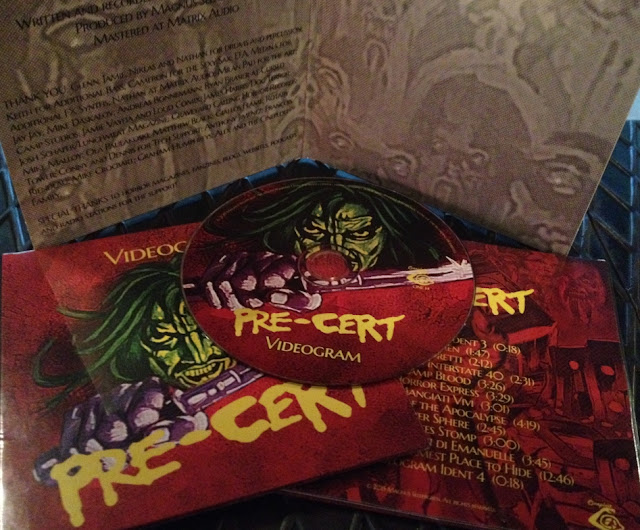 I gotta tell you dear listener that I am an old man. I have lived, and I remember the early 80's well, living through it as a teenager. It truly was a different world back then and in little ol' England and I have to say for most of the decade it was grim. One of the few pleasures to be derived from the early 80's was the weekend pilgrimage to the video store. And the browsing of shelves to find the latest uncensored splatter fest to watch at home with your mates, when someone's parents were out. Or even more risqué material if you were brave or had a proper older brother to hassle. Maybe augment the viewing experience by smoking a few ciggies and raiding a parental drinks cabinet or two for good measure. That was my scene, friends.

Now I am guessing that Videogram (aka Magnus Sellergren) is also a time traveller from that distant dimension. My reason for this belief is their latest outing on all things VHS, the remarkable Cineploit record label. It is called 'Pre Cert' which itself is a direct reference to the 'video nasty' storm of the earlier 1980's and over its (unlucky) 13 tracks it resolutely sticks to its mission to transport the listener back to approximately 1982 by taking inspiration from the video soundtracks to those movies upon which so many schoolyard discussions were based. The selection of musical excursions are often dark, usually doom-laden, and stuffed to the gills with trademark 80's synth and drum/guitar work that somehow straddles a selection of genres that may broadly be termed rock. This really is a love letter to a bygone age. A love letter that is written in blood by someone in an asylum who has just murdered a dozen high school kids in a series of gratuitous, ingenious and perverted tableaux. Its Jan (Bloody) Hammer set loose in the chop shop with Jason for company. Way to go!!!

And so to the selections themselves, particular highlights for me include the drum 'n' synth stomper "Killer on Interstate 40" with its sickly synth washes and nods to the work of such luminaries as the legendary H.Tical (aka Blue Phantom) whose sole 1973 outing 'Distortions' remains the benchmark by which all other auteurs in this musical territory should be measured. "Camp Blood" which I presume is a tribute to the Friday the 13th film series, pulses along with nasty squalls of keyboard and occasional curdling screams. Nice. "Dawn of the Apocalypse" has me simultaneously digging a nuclear shelter in the garden and sharpening broom handles to stab zombies in the head with whilst being beholden to its slow whistles and chimes, all driven by that relentless 80's snare beat. I also just got a flashback to Crockett and Tubbs kicking back in the Florida Keys with a marguerite and a blonde lingerie model on Miami Vice. WHAT IS GOING ON HERE?

No matter my hallucinations, we are compelled by the quality of the music to proceed. A brief interlude into the world of 70's/80's 'sexy films' is visited upon us in the form of the soft focus sweeps of "Le Erotici Notti de Emanuelle" (RIP Sylvie Kristal) which actually is far sexier than most of the Emanuelle films ever were (so I have heard - we never rented them. Not ever.). I particularly love the way the downright filthy saxophone break strides into the room after a minute or so and the mental camera pans to the flickering fire and a quick glimpse of something naughty. Excellent.

And I have to say it is a great piece of music, morphing as it does over its five sections in varying dark moods, one part is a bit like a mash up of 'Another Green World' and the 'Knight Rider' theme tune. You know that's got to be good right? And it is. As well as a bit disturbing. The fade into air raid sirens and an approximation of leg-irons clashing together is a throwing the 'kitsch-en' sink moment par excellence. The 'Pre Cert' aural journey then ends as it began with the credits in the form of a 'Videogram Indent'. You can relax, it's only a movie, in fact it's only a soundtrack to a movie. A movie that is only in your sick and twisted mind.

So there you have it. A late night journey into the dark side with Videogram. He would love you to stay and have you for dinner. If you don't mind being on the menu of course. All fans of the genre should investigate, it's a huge amount of fun. Just don't let your mother hear it.

Available on vinyl/CD/download from the label and local stockists. First 250 of the vinyl with a CD. Check out the video for "Voorhees Stomp" here: