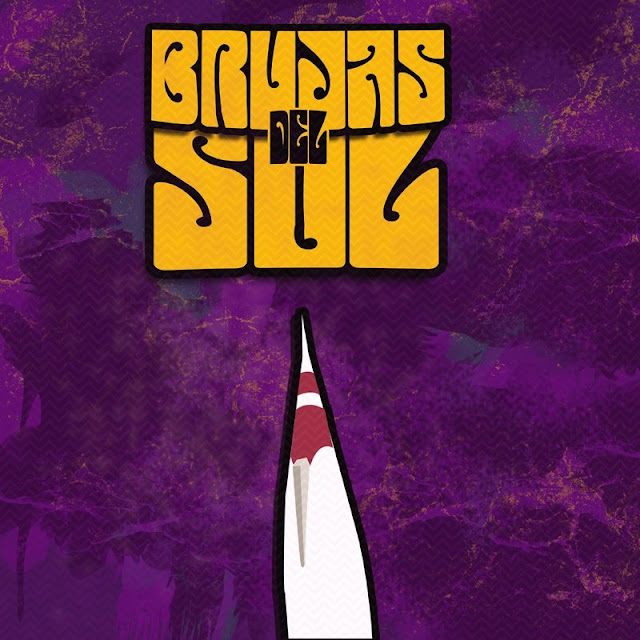 Columbus, OH based quartet Brujas del Sol have made an impression already on anyone who has heard the most recent sampler, with their heady blend of (mostly) instrumental space rock being a highlight for many.
"Moonliner" is their first full length, and is made up re-worked versions of tunes from their early e.ps, with contributions from newest member, keyboardist Ryan Stivers adding extra textural depth.
There's a spontaneous spark at work here that betrays the band's working aesthetic - rather than write songs in the conventional sense, they record all of their jam sessions and pick out the best bits on playback. The results are much more melodic than you might reasonably expect from such an approach -this is no Grateful Dead style jam-fest, although there's an adventurous sense of exploration Jerry and co. would certainly approve of.
Opener "Ships in the Distance" is a good introduction to their huge, cavernous sound as well as their diversity, progressing as it does from moody electronic dissonance, to sprawling space rock, to tight kraut groove with lysergic vocals in place.
There are moments of heaviness too but even these are steeped firmly in psychedelia - thanks mainly to guitarist Adrian Zambrano's effects laden guitar, and Stivers' keyboard work.
Zambrano's effective vocals are used sparingly to help keep attention, but the band shine brightest when they're projecting their tense, spiralling space-rock into the stratosphere with Zambrano's muscular lead guitar work reverberating back off the hills.