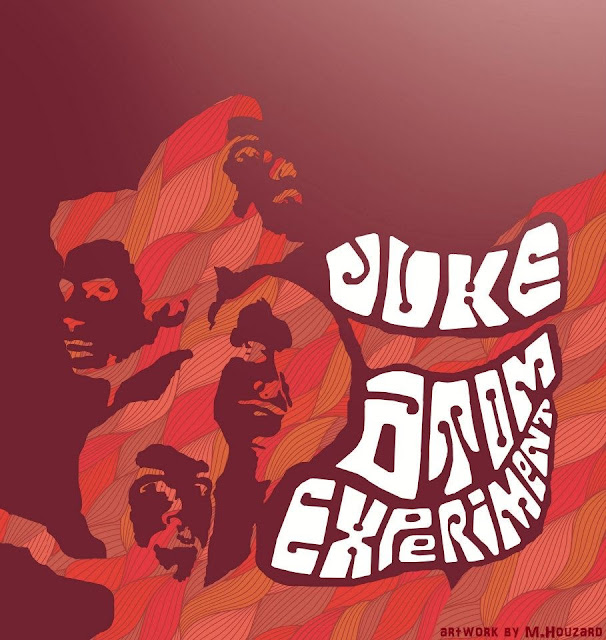 Not total strangers to anyone who's heard the most recent sampler (their "White Elephant" is one of the stand outs), this fine band from Tours, France have put together an impressive debut album with "Atom Experiment", full of complex, everchanging progressive song structures combined with rich, textural and deeply psychedelic sensibilities - a winner for prog and psych fans alike.
Opener "Sphere" emerges unhurriedly from it's initial swirl of ambience, with some lovely, relaxed guitar leads setting the mood, before the chorus finally arrive two thirds of the way in. Who needs verses?
"Wave" is a little more structured, opening with a moody keyboard and bass vamp, that conjures images of Pink Floyd's "Animals", but would be equally at home on an early Alan Parsons Project LP, before opening up spaciously with some luxurious slide guitar work that sounds like it's been beamed down from a distant star.
"White Elephant" sees Juke trying their hand at more conventional songcraft with impressive results, it's majestic, deliberate pacing giving it a sense of grandeur.
Final track "Black Magic" is something of an epic at 28 minutes.
Loooonnnng tracks always make me a little nervous. Perhaps as a record collector I've simply come across too many albums padded out with side long blues jams in my time.  Fortunately while "Black Magic" does occasionally step into jam territory, there's a surplus of ideas on this one track that most bands could make a whole album from. Several distinct nods to "The Dark Side of the Moon" make an immediate impression, but top points on this remarkable track go to keyboardist Quentin Rousseau, whose intricate acoustic piano work recalls the glory days of the early seventies as originally experienced through not only Rick Wright, but also Mike Garson. Fabulous stuff.
Treading a similar path to the likes of Astra, with the harder edges conspicuously buffed off in favor of a more open, spacious, and psychedelic approach this is a hugely promising debut from a band finding their own voice with confidence. I bet the follow up (due in October) will be a blinder.