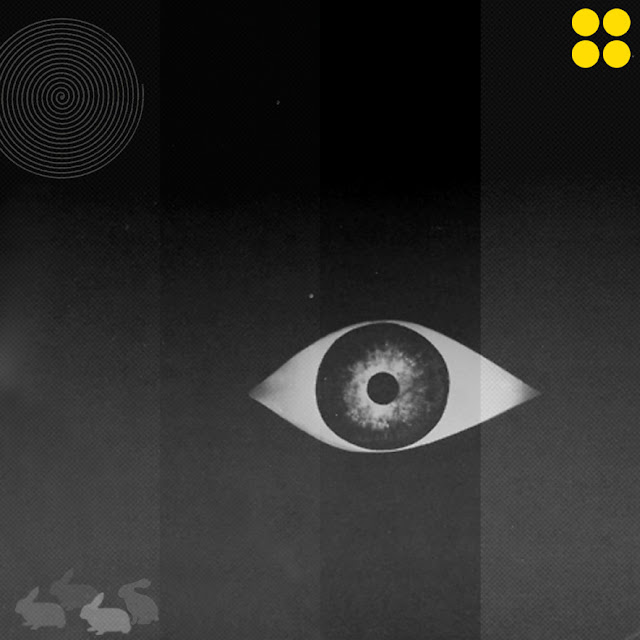 Editor's note : We loved Death & Vanilla's debut here at Active Listener Towers (it featured here in our top 40 of the year last year), but for some reason never got around to a full review. Occasional Active Listener scribe Jason Simpson takes up the reins for this "Obscure Classics" review.

On Death And Vanilla's bandcamp page, they are described as 'moonlighting music pop kraut-lullabies'. To that I would add 'kool kosmic motorik filmstock library music'. This guy and girl clearly relish sounds pre-'70s,
Death And Vanilla's self-titled album from March of 2012 sparks and glows with Kodachrome aura, gloriously burned and smeared around the edges, like a photo of a christmas tree through a vaseline coated lens. I had a bit of difficult unearthing biographical data on the creators, but I'm pretty sure Death & Vanilla are a Swedish duo. They use the traditional rock template; guitar, bass and drums, and adorn it with gothic filigree; electric harpsichords and lots and lots of vibes. All of the instrumentation seems hissy and tape-laden, making me wonder how much of this music is sample-based, or if it's just been lovingly processed and treated. The overall effect is like the '60s worship of The Elephant 6 Collective, or the cocktail library fetishization of Stereolab, The Magnetic Fields or Belle & Sebastian.
Death And Vanilla are performing an etheric, shoegaze rendition of this bossa nova chic, particularly smeary and impressionistic. You can hardly pick out what the vocals are saying, like the ghost of a cocktail singer whispering in your ear as you sip absinthe in a haunted night club. The word 'dream' appears from the haze, from time to time. Death And Vanilla emerge from moldering hauntological underpinnings, like a hallucinogenic fungal infestation in your basement.
They are the same sort of literary archive hackers as Broadcast, The Focus Group and the rest of the Ghost Box affiliates, Pye Corner Audio etc. They are audio revisionists, painstakingly re-creating the murky mystery of antiquated vinyl and strange television in the middle of the night, with or without the fever dreams. Like the rest of the truly great artificers, so much depends upon traditional virtues such as musicality, production, emotion and feel. In short, if you are going to make music that sounds like the incidental music to an episode of the first season of Hammer House Of Horror, your tinny cheap keyboards better sound damn good. Your melodies better be catchy and memorable, your counterpoint superb, if you are trying to sound like advertising music from 1964. And Death And Vanilla's are. The basslines are funky in an 80s plastic kind of way, and all the swirling ghost train keyboards really make for a mesmerizing atmosphere. The vibes are a nice touch, as well as the pulsing, metronomic machine drums, seemingly belched forth from a thrift store Hammond. It all combines to cast you under its spell, beginning with the opening 'Ritual' and never breaking, enveloping and breaking over you. It seems like the score to a French New Wave fairy tale, a pastoral sense of adventure, a colorful psychedelia. This cinematic feel is further emphasized by the inclusion of a couple of 'incidental tunes' , 'Somanbulists' and 'Library Goblin', that leave you aching to go find some oversized VHS video nasty you've never seen. It leaves you yearning for undiscovered treasures.
Death And Vanilla's self-titled opus is one such undiscovered hoard. It deserves to be heard by many. For those with curiosity about the future of nostalgia, take a gander in this direction.
Fall under its spell.