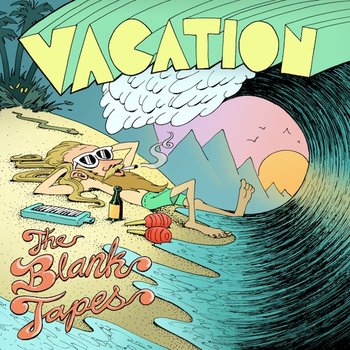 This one's been on high rotation here for the last month, partly as it's irresistibly sunny Summer vibes have been helping me deny that it's suddenly very Wintery over here in New Zealand, but more because it's full of tunes that I can't get out of my head, and I sound less crazy if they're actually playing in the foreground as I tunelessly hum them to myself.
The Blank Tapes have been operating for ten years now under Matt Adams leadership, but "Vacation" sees them hit a new level of refinement, as Adams and his current three piece line up (also featuring Pearl Charles and D.A Humphreys) leave the garage behind and step into the sunlight.
This newfound studio sheen, coupled with a surprisingly diverse cross section of songs, and some irresistible three part harmonies (four part when I'm on song) makes this the most accessible, charming set of feel good indie pop you're likely to hear this year.
A sunny Californian Kinks immediately comes to mind (check out "Holy Roller")  - Matt has a certain register that he hits every now and then that channels Ray Davies effortlessly, but there's also something in the construction of these songs that owes a debt to the Kinks. Like Davies, Adams writes songs that immediately bait the ear with massive, seemingly simple hooks that upon further investigation are full of subtle nuances - an unexpected McCartneyesque chord sequence here, a shambling bossa nova beat there.
Add some appealingly garagey Strokesisms ("Tamarind Seeds"), melancholy West Coast harmonies ("Coast to Coast") and a refreshingly anthemic spin on the never get old chestnut (er, "Don't Ever Get Old") and you've got a diverse gem with immediate appeal that reveals unexpected layers with repeated immersion.