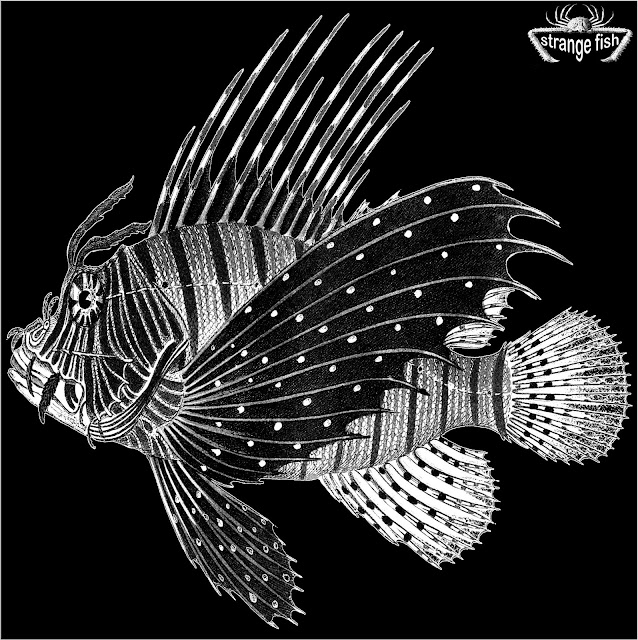 The ocean covers 71 percent of the Earth's surface, yet more than 95 percent of this underwater kingdom remains unexplored.
It requires no stretch of the imagination, to assume that there are some strange, beautiful creatures out there waiting to be discovered, and Fruits de Mer Records in the interests of scientific and musical discovery have put together this four part expedition, charting unexplored depths and discovering some very strange fish indeed.
A little history first. Fruits de Mer, as you will know if you peruse these pages regularly, are a specialist vinyl only label dedicated to often groundbreaking contemporary covers of classic psychedelic era material. As all good labels grow and diversify, the next step in their evolution was Regal Crabomophone, an offshoot label that gave a number of these artists an opportunity to showcase their own psychedelic material.
Strange Fish is the next step into a much more specific, niche world - a label dedicated to the more experimental, often electronic based sounds that sprang forth from the seed that psychedelia planted in the late sixties. Fruits de Mer have covered this territory before on their 'Roqueting Through Space' and 'Head Music' compilations, but never with new material.  So, spread here over four instrumental LPs (two of which are doubles), various Fruits de Mer artists and a bunch of new discoveries set their metronomes, plug in their wonky analogue synths and head for the horizon and beyond.
As you'd expect from the number of different acts involved (29!), there are a variety of approaches employed here, and it's remarkable how well everything slots together.
Strange Fish 1 is a single LP affair with an ambient sequencer / guitar flavor featuring Fruits regulars Sendelica, as well as Craig Padilla whose two pieces here remind this listener of the more accessible end of the Tangerine Dream spectrum, circa 76-78. A very nice start.
Strange Fish 2 focuses more on the Krautrock side of things with a distinct prog rock tinge on a number of tracks, highlighted for me by the Grand Astoria's appropriately titled "Space Orchid Vs. Giant Drumkit".
Moving on to Strange Fish 3 now, which is my favorite of this first bunch of releases. For the most part kosmische music with motorik rhythms and some lovely vintage sequencer work, this features a more concise selection of material than the first few volumes with numerous highlights. Zenith:Unto The Stars balances the epic and the playful perfectly on "Gemini", a track that could have been lifted from one of Jean Michel Jarre's better LPs, while Hi-Fiction Science offshoot Dead Pylons explore their inner Neu impressively over three tracks.
Strange Fish 4 explores a more contemporary approach to ambient, with synthesizers and acoustic guitars given equal billing, with some particularly nice tracks from James McKeown standing out - all pastoral loveliness. If you loved "Life Aboard the International Space Station" from his album "English Dream", then you'll want to hear these tracks. The Bordellos also impress.
So four volumes of instrumental kosmiche music to take in at once is obviously not something that everyone has the inclination for, but I imagine you've already decided whether you need to hear this stuff or not and don't give a damn what I say about it, but here's my ten cents worth anyway. If this is your niche, grab them all - you won't be disappointed (and you'll get a free CD with more tracks in a similar vein). If you're more curious and want a bit of a sampling of what the range has to offer then certain pick up Strange Fish 3 or 4, which are slightly more listener friendly and less inclined to wander but don't dawdle because as you know with Fruits de Mer related releases they sell out very quickly indeed and that's got to tell you something doesn't it?

UK people can order directly from the label here, while customers outside of the UK are directed towards the always excellent Norman Records, who will no doubt be offering these for pre-sale very soon.