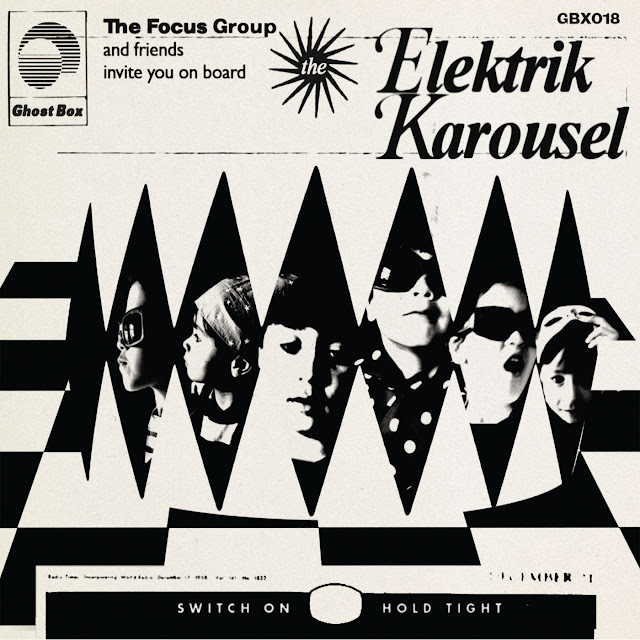 Julian House wears many hats - co-owner and co-founder of Ghost Box Records, graphic designer (all Ghost Box releases so far feature his classic Penguin paperback influenced art), Broadcast collaborator, and musician in his own right under the pseudonym The Focus Group.
While Ghost Box artists all share a similar aesthetic ("united by a design identity, fragments of real or imagined books, collections of images, films, links... Something people can become lost in ..." explains House) the end product is markedly different in each case, with the Focus Group providing the most surreal, and certainly the most psychedelic material released on the label.
"Elektrik Karousel" is his first album in six years, and uses the same cut and paste scrapbook approach that we've come to expect from him, although the resulting album is somewhat moodier than we've heard in the past. There's still a sense of playfulness underlying even the moodiest themes here, but there's also a sense of melancholy, that coupled with the deeply nostalgic euphoria his music evokes leaves a bittersweet aftertaste.
House seems to have a short attention span with 29 tracks scattered over "The Elektrik Karousel" - many of them around a minute long. It's certainly not music for everyone - those who like to see an idea investigated to it's fullest should move on immediately, but others with a suitably hyperactive mind will be fully drawn in by House's varied and imaginative vignettes - musique concrete, harpsichords, jazz, music boxes and more coalesce into a giddy rush that sounds like it's been retrieved straight from the rabbit hole.
Sure, it'd be nice to see House realize some of his more interesting ideas a little more fully (although "The Magic Pendulum" breaks the six minute mark - something of a mammoth effort in Focus Group terms), but there's no denying "The Elektrik Karousel"s creativity.
Essential listening for those of a suitably adjusted mindset.

Available digitally here, or directly from the label in physical formats here.