Here's another batch of reviews for E.Ps that you can find on Bandcamp - all are available as either FREE or NAME YOUR PRICE downloads. 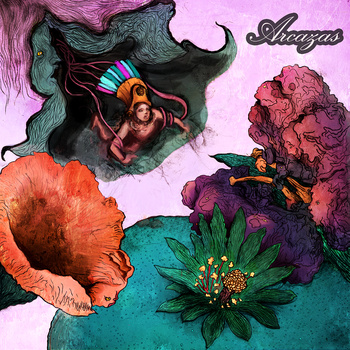 Felipe Arcazas - Nahuatl
Brazilian one man band Arcazas casts his psychotropic spell over this lovingly crafted piece of stoner / desert rock. Brant Bjork fans should check this out immediately, although Arcazas pieces are more texturally crafted and being more instrumentally focused, are a little more diverse with some nice jazz chops and rippling synthesizer washes on show. Desert grooves are the order of the day, but a hazy psychedelia permeates everything here with "Sinicuichi" in particular weaving a mind-befuddling, hypnotic spell that is near impossible to break free of.
Available here as a name your price download.
Listen:


Ummagma / Virta -Split E.P
Ummagma have joined forces with similarly uncategorisable Finnish outfiit Virta for this immaculate free E.P.
Virta play delicately chiming post-rock with some seriously engaging and melodic trumpetwork from Antti Hevosmaa that maintains it's blissful, lyrical clarity even when the surrounding terrain is building to a crashing crescendo.
Husband / wife team Ummagma on the other hand impress with the moody, cinematic flow of  "Back to You" with Alexx Kretov's vocals suggesting an alternate universe where Thurston Moore followed Mike Patton's twisted path.
An excellent introduction to two bands that you'll hear a lot more about in the future.
Available here as a free download.
Listen:

Kanoi : Basque For Barrel
Austrian Benjamin Kantschieder operates one man band Kanoi as "an outlet for his ongoing quest of combining ambient soundscapes and the experimental mind-set of 70s space rock"
"Basque For Barrel", his eleventh(!) release since early 2011, certainly plays both of those cards, and adds a dash of stoner rock into proceedings too with the riffy "The Heather Blazing".
The 2001 sampling "Insertion" is the most successful of the exploratory ambient pieces, while the moody  "Suspicions Aside" is the pick of the lengthier pieces, an aching space-rock infused blues, with gritty, tense slide guitar.
Available here as a name your price download.
Listen :


Diamond Incarnation : Refreshed Resurrection
Diamond Incarnation, also from Austria approach the sixties via the nineties with a sound reminiscent of the more psychedelically aware artists of the britpop era. There's a definite Beatlesque tinge to these songs with anthemic numbers like the riffy, single-worthy "Lovely Mystery" and "Down, I'm Going" producing some memorable neo-psychedelia, backwards guitars and all.
Best of all is "Cloud of Absence", a mystical sounding acoustic track with prominent sitar that ought to keep the Kula Shaker and George Harrison fans happy.
Available here as a name your price download.
Listen: