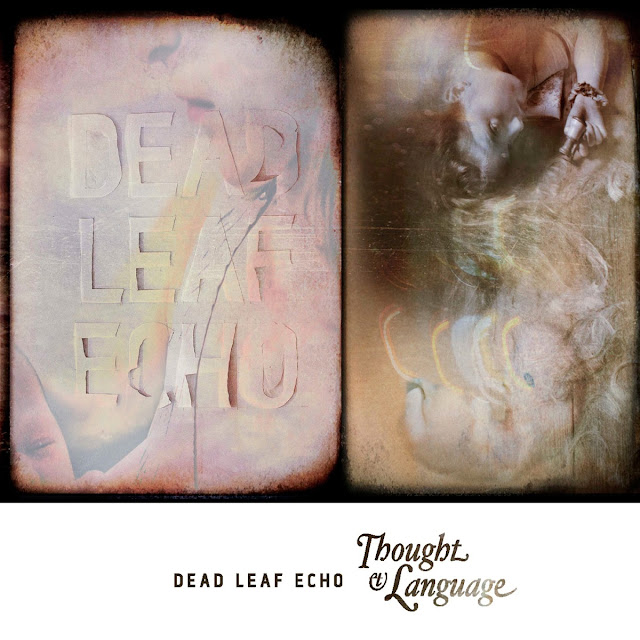 "She was only the dead-leaf echo of the nymphet from long ago ..." - Vladimir Nabokov

An interesting and seemingly self-effacing quote to name yourself after if you're a band operating in a genre that a number would consider had peaked near it's creation in the late eighties and early nineties.
Of course those who dig a little deeper will be aware that there's a vibrant current shoegaze scene that certainly stands proudly with the original in terms of quality and invention, even if the wider music media tend to virtually ignore it, and retreading former glories is something that bands like Dead Leaf Echo should never be accused of.
Sure, Brooklyn based nu-gaze (or nouveau wave as this bunch refer to themselves) three piece Dead Leaf Echo don't mind wearing their influences on their sleeves, but with a full length debut as strong as "Thought & Language" they can consider themselves peers rather than imitators.
4AD producer John Fryer (Cocteau Twins, Lush, This Mortal Coil) is on hand to mix, and this certainly helps conjure an authentic shoegaze aesthetic that recalls variously, early Swervedriver, Lush, Chapterhouse and the Boo Radleys before they discovered the Beach Boys.
Tastefully bypassing the distortion laden squall that some of the more popular shoegazers exploited, Dead Leaf Echo instead rely on an expansive, broadly textured sound, with layers of gorgeously swelling guitars steeped in delay, and cavernously reverbed vocals that often operate more as another instrument in the mix, with the need to convey lyrics seemingly being given secondary importance.
It's just the sort of album that I'd recommend to my more psychedelically inclined readers, particularly those that still regard shoegaze with a whiff of suspicion - it's notably short of the sort of cheesy alternative rock tendencies that trickled into the works of some of the original practitioners of the scene fairly early on in proceedings, with a focus instead on the chilly, glacial beauty that lay at the heart of the very best early 'gaze LPs. And with songs like "Memorytraces" and "Kingmaker", they've got hooks that can compete with the best of them.
Recommended.