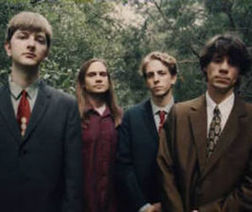 Quite possibly the best powerpop album of the nineties has been rereleased in a deluxe edition.

Cotton Mather's Kontiki was originally released in 1997 and is the best of their three great albums. Their back catalogue has been out of print for some time now, so it's great to see this back in print in any format - let alone with all of this great bonus material. It's released by Cotton Mather mainman Robert Harrison's own label and may not stay in print that long, so don't miss out on the chance to discover your new favorite album.
If you can imagine Guided By Voices working their way through Rubber Soul / Revolver era Beatles, you've got an idea of what to expect.

The official website has this to say :
Austin, Texas band Cotton Mather is preparing to reissue its long out-of-print landmark power pop album Kontiki on Valentine's Day, 2012. The album was originally released in the US in 1997 with little fanfare.

In the UK, however, Kontiki was a smash with Uncut Magazine giving the album five stars and calling it “music to smile yourself to death to.” Mojo said the songs were “brought to life with daring vitality” and in its own five-star review, The Guardian called Kontiki “a bewildering, dizzy thrill.” With the spotlight shining on the album in their homeland, Oasis brothers Noel and Liam Gallagher discovered and fell in love with Kontiki. The Gallaghers started talking about the record in the press themselves, helping to spur on a cult following for the album among musicians all over the globe. A fellow Austin-ite and fan from the beginning, Spoon’s Britt Daniel also began to spread the word, and over the years, the adoration of Kontiki continued to grow, leading band leader Robert Harrison to prepare Kontiki (Deluxe Edition).

Released on February 14th, 2012 on Harrison’s own Star Apple Kingdom label, the two-CD deluxe format will include the original album along with four-track demos, acoustic versions and songs that didn't make the final cut. Harrison funded the reissue via a Kickstarter campaign made successful by the many fans that Kontiki created since 1997. The campaign was undoubtedly also helped by the profound endorsements and damn funny presentation captured in this promo film seen here: