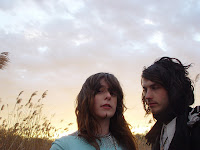 Beach House have posted the first track from their forthcoming album online today.

The new album, their fourth is due out later this year. It'll be titled Bloom, and rumor has it that it'll be released May 15 on Sub Pop, although no official statement has been made by band or label to substantiate this as yet.

Victoria Legrand and Alex Scally have stated that the album will be darker, and that they were aiming for something along the lines of The Cure's 'Disintegration' and The Beach Boys' 'Pet Sounds'.