Look Out For ...The Mixups

Fabulous Glaswegians The Mix Ups have decided to eschew the normal route of album release and release a downloadable single each month.   Check out the sound samples further down the page.
They're great fun, with major sixties influences - think The Coral's early material. 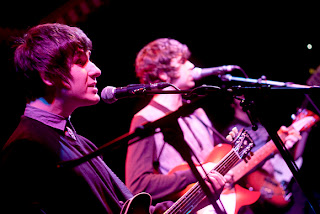 Official Bio: Named after the ‘10p mixups’ you got at school, you just never know what you’re going to get next with Glasgow based band THE MIXUPS.
Rhythm Guitarist and Vocals - Jamie Cameron, Bass - Ryan Tobias, Drums, Vocals - Paul Preston, and Lead Guitar/Keys/Vocals - Jamie Haffey are the young fellas behind the music.
The four young, talented musical-players have been a group since 2009 and progress has been rapid. Festival appearances, a sell out debut E.P tour and national radio spins from Mark Lamarr (radio 2) and Jim Gellatly (radio Scotland) have all added to the ball of hype surrounding THE MIXUPS. Support slots with members of The Bluetones, The La’s and Supergrass have also attracted press coverage.
The band released a single on December 1st and will do so every month after that for a year, available on download from itunes and other online stockists. After taking time out from gigging after their sold out debut E.P tour, which culminated in a fizzling performance at a sold out King Tuts in January, the band have been recording since then and have amassed a wealth of songs and a vibrant new sound.
With a splash of sixties style, a dash of nineties groove and a helping of noughties naughtiness, Britain’s newest hitmakers have arrived.

You can buy digital downloads of two of their tracks at amazon.co.uk by clicking the links below :

Or visit their itunes store here.

Email ThisBlogThis!Share to TwitterShare to FacebookShare to Pinterest
Labels: The Mixups