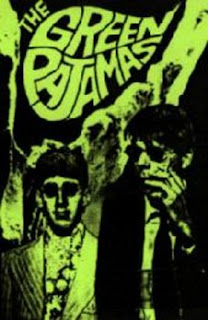 Originally released in 1984, Summer of Lust was the first Green Pajamas album and was only released on cassette ( apart from a very brief vinyl run in 1989 ).
The fine folks at Green Monkey Records are working hard on it's first ever CD release. Green Monkey have released a number of Green Pajamas related releases including a very thorough reissue of the Book Of Hours with lots of bonus material. If the quality of that reissue is anything to go by Summer of Lust should be a real treat. Those that have heard the very scarce original Summer of Lust have overwhelmingly positive things to say about it.
Tom Dyer from Green Monkey Records had this to say today  : "Spent 12 hours yesterday working on remastering the Green Pajamas' first cassette release, "Summer of Lust." Some of it involved working from the original cassette master, some finding earlier generation cassettes that Jeff has hidden around, selective use of noise reduction to battle tape hiss. It is coming along pretty nicely. I think I got Mr. Ross to agree to finish up the cover this week and we are on track to have this out in May."
Check out the Green Monkey Records website here : http://www.greenmonkeyrecords.com/