Can To Release Rarities Box Set, Listen To The First Track Here. 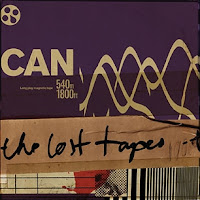 All of you Can fans have reason to rejoice. Not only do you have impeccable taste, but that taste will be rewarded on June 19 by the release of The Lost Tapes, a 3CD Box Set of unreleased rarities recorded between 1968 and 1977 featuring the core quartet along with  Malcolm Mooney and Damo Suzuki on some tracks.
The band's keyboard player Irmin Schmidt, Daniel Miller, and Jono Podmore have culled this down from over 30 hours of material from the group archives, which were stored in their studios. When the German Rock n Pop Museum bought the studio from the band recently, the tapes were rediscovered.
The box will include material left off their classic albums due to time constraints on the original LPs, tracks recorded for soundtracks of films which were never completed and some live tracks.


Listen to Millionenspiel, the first track to be released from the box below.

Email ThisBlogThis!Share to TwitterShare to FacebookShare to Pinterest
Labels: Can, News