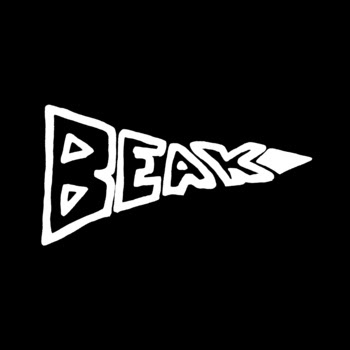 One of Geoff Barrow from Portishead's many side projects, Beak> is an intriguing outfit, and essential listening for those that enjoyed the darker musical furrow plowed by Portishead on their wonderful album Third.
Hard to define, but most commonly described as Krautrock, although whether that's been offered by the band or a media description I'm unsure of, it's true that beak evolves the preoccupation with Krautrock that was evident on Third, but it also manages to run it's influences through an unmistakenly English filter that recalls everyone from Joy Division to Black Sabbath, to produce an often unsettling, but never boring album. 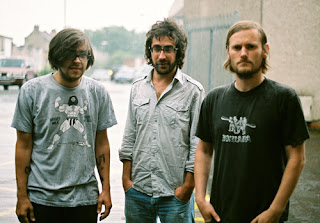 Billy Fuller and Matt 'Team Brick' Williams join Barrow in this three piece, and everything on here was written and recorded over twelve days in the studio, with no overdubs. Clearly those looking for a tightly structured set of songs should look elsewhere, but for those keen for something a little more adventurous, read on.
Opener, Backwell jumps into fizzy life with some pure Neu motorik and creepy but catchy organ work - music from a carnival where you wouldn't turn your back on the clowns.
The Cornubia is probably their calmest moment, with a ghostly chorus of voices accompanying a steady metric drumbeat and slinky Mogwai-esque bassline.

Ham Green sounds a lot like Link Wray's Rumble, only played by Black Sabbath's rhythm section at half speed with a witches coven chanting in the background.
Battery Point crests in on a wave of delicately shimmering guitars and is a beauty that Explosions in the Sky would happily find a home for on one of their albums.

Blagdon Lake is a more lively affair with it's insistent beat and post-punk informed bassline.
Barrow Gurney on the otherhand is a wall of screeching electronic feedback that I'm almost convinced was my modem trying to turn me into Jack Torrance.
Dundry Hill is the creepiest thing here ( perhaps anywhere ) with it's tribal pagan percussion, walls of drones and vocals that sound like someone dangling a microphone down a haunted well.
Ultimately it's Barrow doing exactly what he wants to do, and you get the impression that he doesn't really give a damn if you care for it or not. For those of us that do this is a pretty engrossing listen.
For those who want to hear more they also contributed a cover of Welcome to the Machine to Mojo's Dark Side of the Moon / Wish You Were Here covers album, which sounds like an unearthed Joy Division cover.