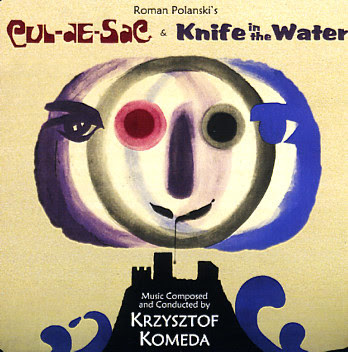 A celebrated Polish free-jazz musician and film scorer Krzysztof Komeda had already been used by Roman Polanski to score his tense drama / thriller Knife in the Water. Komeda's soundtrack for Polanski's classic black comedy Cul-de-sac is an entirely different kettle of fish and is as lyrical, quirky and entertaining as the film itself.
A short but impressively evocative beast with only 7 tracks and clocking in at under twenty minutes, it was only released as a 45rpm E.P originally and has been particularly sought after since. Fortunately Active Distribution have seen fit to couple it with Knife on the Water for this CD release so it's now readily available for the masses - well, the niche masses who enjoy this sort of thing anyway.
There's a surprising and impressive variety to be found here, considering it's short length.
The title track is a memorably quirky, playful piece with a sinister undercurrent, which sounds like something John Barry would come up with if given the chance to replace his spy guitars with a theremin.

Pushing The Car is a tightly structured jazz noir piece with a memorably hypnotic theme that wouldn't sound out of place on one of Henry Mancini's Pink Panther scores.
Walk On The Water continues Pushing The Car's noir strut with some nice muted trumpet added.

Radio One and Two are exotic lounge pieces, heard on radio in the film, and give Komeda a chance to flex his piano playing chops and lighten the mood a little.

Dicky's Death is a looser piece with some atonal sax work, sinister, rattling percussion and loping basswork, with a neat revisit to the main theme working it's way in.
Then closing theme is arranged for a rock group format with a more conventional time signature, some subtle guitars and bass as well as the return of the theremin.
Great stuff, definitely my favorite of Komeda's scores up until his creepy masterwork Rosemary's Baby.