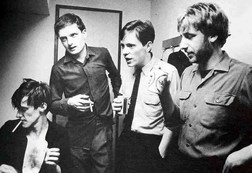 Don't get your hopes up though. For a start, it's pretty bloody awful. And secondly Peter Hook is doing his damndest to make sure people don't think it's legit : "I've heard it. It's a hoax and it's bloody awful. They're quite clever, these guys, they sound like college kids to me, they've captured the atmosphere quite well, but it's a hoax. If Ian Curtis ever sang lyrics like that, I'd have kicked him up the arse."

On the subject of the likelihood of there being any treasures left in the Joy Division vaults to still be discovered he had this to say :  "Everytime you hear about tapes being discovered, you think there maybe more songs, but I think I can safely say that there isn’t anything more to do with Joy Division to come out. There's not much left over, when you're young, you don't think for tomorrow".

He has however recently been given a tape of Closer outtakes, some of which feature radically different takes than those eventually released : "I've got a tape that's recently come into my possession, which is outtakes from 'Closer'. It's interesting because the songs are quite different, we changed the songs quite a bit in the studio and the songs are very different. I'm not planning to do anything with it at the moment."