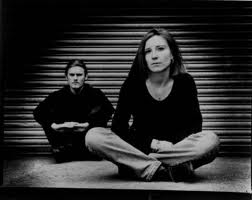 Portishead's Geoff Barrow has confirmed that work on their fourth album will start soon "We've been getting together recently and talking about lots of stuff. There's definitely going to be another record, we're just going to get on it as soon as my studio gets working."
"We've not got anything at all down, but for me doing things like Drokk and Beak and lots of other things I've got my finger in has made me realise that that's the way forward for me, just to keep on making music, so I don't stop, so it doesn't become an issue. I can just carry on writing, get the momentum going - that's what everyone wants really, to feel able."
He's also admitted that the band are staunchly adverse to the idea of their albums being reissued in deluxe edition formats, so unless there's a lot of pressure from their label it seems those of us hoping for a 20th anniversary edition of Dummy in 2014 will be disappointed.
He said that special editions had become a "dirty word" in the group, arguing that they are simply a tool to "squeeze more money" out of fans.
I tend to argue that fans will already have the original edition, and that there's plenty of ways for them to sample or read reviews about any potential bonus material and make an informed decision before buying, so why not let the fans make their own decisions?