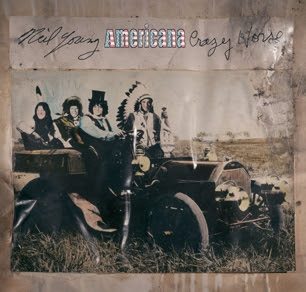 Neil Young has confirmed today that "Americana" will be released on June 5th. Neil's first full album with Crazy Horse since Greendale, and the first with the full line up since Broken Arrow, it will feature heavy reinterpretations of mostly traditional folk tunes.
At the Slamdance Film Festival earlier this year, Young talked about the album. "A very young choir of children plays with Crazy Horse [on the album,]" he said. "They're songs we all know from kindergarten, but Crazy Horse has rearranged them, and they now belong to us."
"What ties these songs together is the fact that while they may represent an America that may no longer exist," says a press release announcing the new album."The emotions and scenarios behind these songs still resonate with what’s going on in the country today with equal, if not greater impact nearly 200 years later. The lyrics reflect the same concerns and are still remarkably meaningful to a society going through economic and cultural upheaval, especially during an election year. They are just as poignant and powerful today as the day they were written."
Young previewed a number of these tracks on a lengthy jam session that was briefly available on his website a few months ago, and may still be doing the rounds online if you look hard enough for it.
The tracklisting for "Americana " will be
"Oh Susannah"
"Clementine "
"Tom Dooley"
" Gallows Pole "
"Get A Job "
"Travel On "
"High Flyin’ Bird "
"She’ll Be Comin ’Round The Mountain"
"This Land Is Your Land "
"Wayfarin’ Stranger "
"God Save The Queen"