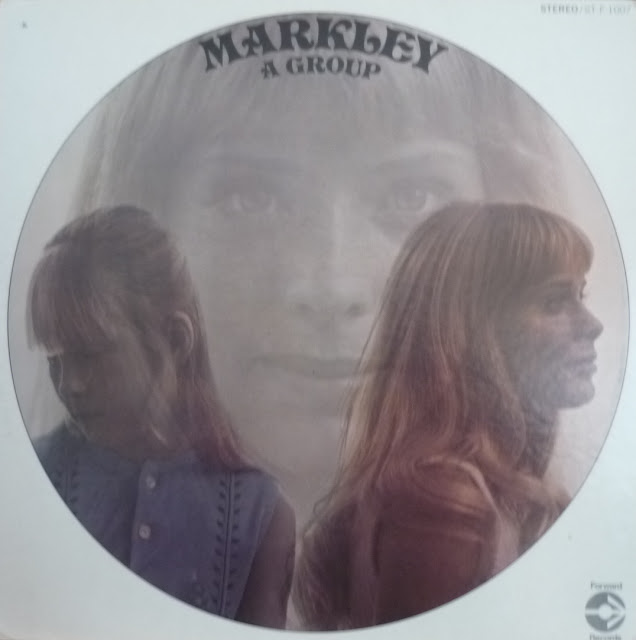 Having enjoyed The West Coast Pop Art Experimental Band's Child's Guide To Good & Evil ( I'd recommend reading it's review here to get an understanding of the band's internal make-up ) so much, I thought I'd finally check out their final album, which I'd never gotten around to listening to. The previous album, Where's My Daddy, had been mostly half formed and incoherent and I'd assumed that this continued the downward slide.
To my surprise it's actually a much more consistent offering than their earlier albums, and a bit of a flawed gem. I can see myself playing this more often than their first two Reprise albums - sacrilege I know, but true nonetheless.
Bob Markley's egomania had grown to such an extreme at this point that he insisted on a change of name to Markley - A Group. The rest of the band rolled their eyes, and got on with it and while it's certainly a change in direction, it's a valid statement of it's own.
Michael Lloyd's reappearance is a vital key to the success of this album, with his production and arrangement skills used to very good effect. The psychedelic excesses of their earlier work is largely jettisoned in favor of a much more organic acoustic sound, with exceptionally well arranged harmonies.
Gorgeous character vignettes Elegant Ellen with it's subtle wah wah flourishes is an excellent example of this new direction, as is Sarah The Sad Spirit with a gorgeous, baroque string arrangement that's not a million miles removed from Robert Kirby's work on Nick Drake's Five Leaves Left.

Elsewhere Booker T & His Electric Shock is an account of Danny Harris' time in an institution and foresees Belle and Sebastian's ability to marry a potentially traumatic lyric to an arrangement  full of bouncy verve.

The Magic Cat is more of a throwback to their early sound, a hyper melodic psychedelic harmony pop song which could have been a radio hit had it been released a few years earlier.

Roger the Rocketship may contain Bob Markley's finest lyrics ( faint praise admittedly ), and is a frequently hilarious account of extreme paranoia which is far too insightful to have not been inspired by first hand experience.
The only real misstep comes with a re-recorded version of Outside / Inside, previously found on Where's My Daddy. Michael Lloyd's string arrangements are certainly an improvement on the original track, but combined with an overly chirpy chorus it comes off sounding like something from the Mary Tyler Moore show, and doesn't sit well with what has otherwise been a very cohesive record.
Don't believe the non-hype, you're missing out on a gem.