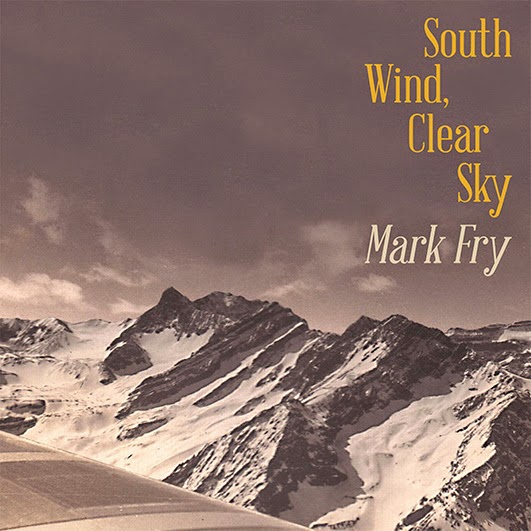 Mark Fry will forever be known as the genius troubadour who created the 1972 classic "Dreaming With Alice" at the tender age of 19, an album which caused few ripples at the time of release but was destined to become the holy grail for collectors and aficionados of that most curious, cryptic and colourful of genres; psychedelic or acid folk. "Dreaming With Alice" has since been reissued for a new generation to lose themselves in its dreamy, oft creepy and downright beautiful collection of wonders. It has lost none of its resonance over the years and neither, it transpires, has Mark himself. A second album "Shooting the Moon" emerged in 2008 and was followed by a third, "I Lived in Trees", recorded with backing from The A Lords (otherwise known as United Bible Studies member Michael Tanner and Nick Palmer of Directorsound). And now emerges "South Wind, Clear Sky", an album of such depth and easy beauty that those who take a trip down this particular rabbit hole will possibly not want to return. This is easily one of the most quietly brilliant albums this listener has heard in a long time; it would be a musical crime for it to not receive the rich appreciation it deserves. Quite simply, Mark has created another classic.

Opener "Aeroplanes" is a gentle but insistent cello driven eulogy to the act of escaping. Mark's vocals are like running water over the chamber folk of cello, strings and acoustic guitar. For lovers of the work of Duncan Browne, Keith Christmas and contemporary acts such as The Driftwood Manor and Mark Eitzel this is essential listening. I'm tempted to add Nick Drake to this description, not because Mark sounds like Nick Drake; he doesn’t. Yet there is the same late Sunday afternoon, autumnal feel to his music; the same sense of gentle, pastoral melancholy. "Along The Way" is a hushed, psych masterpiece, trumpet accentuating the more barbed twists in Mark's lyrics. British Sea Power would be proud to write a song of this quality, indeed it recalls their "From the Sea to The Land Beyond" opus in its nostalgic, delicate sadness. "Leave Me Where I Am" is by turn a twinkling, shimmering nocturne, picked guitar draping Mark's plaintive vocals over the stars in the night sky. Brass and cello support the quiet swell of the song as it builds both in musical and emotional power. "Little Flashing Light" is a slide guitar driven space flight, albeit one which gazes in silent wonder at the earth below; this music is gentle, its power is in its ability to affect and transport the listener. There does seem to be a general theme of escape, flight and leaving on this album that filters through the songs. The music was apparently inspired by the work of author and aviator Saint-Exupéry; it certainly adds a melancholy, almost wistful air. Again, whilst Mark doesn't sound like Nick Drake, the atmosphere and smoky, darkening afternoon vibe on this particular song recalls his classic "A Northern Sky". A chiming, echoing piano enters to bring the song to a warm and moving close. "River Kings" is the closest stylistically of all the tracks here to the Mark Fry of "Dreaming of Alice", it is a bewitching, acoustic reverie at once both timeless and strange. Otherworldly and unique, it sounds like it could have been written at any time over the last thirty years. There then follows "Fall like Stone", which, with its Gilmour-esque guitars and widescreen reverbed atmospherics, is truly beautiful. This is starlit night sky music for dreaming in. Indeed, lovers of The American Music Club’s similar twilight musical paean to travel and escape "Everclear' will find much to appreciate here. "Dials for Home" is by contrast more electric guitar led, an urgent request to find a way home. With a country tinge abetted by backing vocals and swathes of cello the track is almost cinematic in its building intensity and sense of quiet desperation. "Long Way Down" , the album closer, returns to the gentle sepia feel as cascading piano notes, yearning trumpet and echoed guitar creating a melancholic framework for Mark's voice. It is a perfect closing song, a wave of choral vocals fading out into the night sky.

I cannot recommend this album highly enough. It is a mature work by an artist who is quite simply a hidden national treasure. It is a graceful, beautiful piece, full of wonder and sadness and perfect for those long, darkening late winter afternoons. Take to the evening skies on the south wind; you will not regret it.

Available now on the fine Second Language label. South Wind, Clear Sky’ comes in 2 formats: a CD in an 8 panel concertina digipak and a 180gm vinyl with a free download code of the whole album, both are available here.