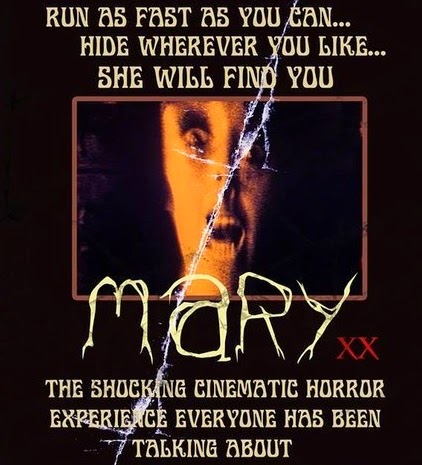 The shadowy, enigmatic and elusive (nay, almost invisible) duo The Unseen are best known as the creators of the notorious soundtrack for "The GoatMan", a legendary lost piece of obscure film music from an equally little seen but much remembered horror movie. Now, at this most sinister and haunted time of the year (co-incidence?), they have had another body of work exhumed for the delectation and dissection of a modern audience. The two composers Simon Magus and Harold Legg, having seen their sinister yet splendid electronic scores met with only cult audiences during their heyday, are having something of a resurgence, a reanimation of their muse with the soundtrack to "Mary". The film in question is by all accounts an (in) famous celluloid shocker in which the protagonist, a terrifyingly murderous child, rampages through friends and the general public alike. You may remember seeing this perhaps late at night during the rare few showings in the early hours on television during the 80s. For some, the key images from the film live on in their nightmares. And now the soundtrack to those night terrors is available to purchase on, appropriately enough, Halloween.

The album opens with the Villa 9 Studios logo theme, Villa 9 being part of the production company that is sourcing and reissuing these lost, fabled soundtracks (do visit their Facebook or Soundcloud page for other dark and demented wonders). Then, a vintage ambulance wails, leading into the sounds of swinging London; cue some faded jazz and lone footsteps...and a little girl's wordless lullaby. Except this is the creepiest, most unsettling lullaby you will ever hear. And, judging by the screams that follow, it was the last that some low key character in the film herself heard. "Mary's Opening Title Theme" is a masterful carnival waltz of twisted electronica, cascading John Carpenter piano (think "The Fog") and minor key synth washes that layer tension upon tension. It is at once both beautiful and deeply eerie; a haunted theme tune deeply reminiscent of a darker, seedier London, the sixties dream turned 70s horror show. "London 5am" is equally lovely and strange, synthetic chimes and music box notes creating a chilling calm before the inevitable storm. "Look Up" by turn is a hallucinatory, flanged nightmare; the tape runs slow before electronic percussion and wild, screaming analogue howls and bleeps pierce the darkness. Likewise th dark jazz of "Bad Soho" seems to slow and reverberate before the deranged and echoing laughter of some future victim hangs motionless in the air; a very bad trip indeed. "Detective Foster's Midnight Drive" is a classic piece of vintage keyboard harmony, deeply emotive and stirring in its building of pace and pressure, arpeggios whirling around the symphony of fear.

It is worth noting just how accomplished The Unseen were. The films might have been B-Movies and the budget miniscule but somehow this pair managed to create sounds the likes of today’s Ghost Box luminaries such as Belbury Poly would give their left oscillator for. The melodies are massive; the delicate touches (hints of harpsichord, carefully positioned single piano notes) are perfectly pitched and chosen. An ominous creaking leads into that lullaby again (voiced by the mysterious and marvelously named Frida Helsing), this time accompanied by church organ and a deranged tango of chimes and bells. This is music from the darkest of visions, the very pits of 70s styled hell (draped perhaps in shades of browns and orange and even, terrifyingly…mustard yellow). And yet once again the music is curiously beautiful in its cold, haunting grace. I really don't want to know what is served at "Mary’s Tea Party" but the accompaniment is truly spellbinding, whilst "Shadows in the Fog" shimmers with the suggestions of figures; a hazy analogue nocturne. Next, the seemingly innocent "A Childhood Melody" enters, a gentle, music box melody with just the right hint of dread. "Her Father's Voice", with its spoken 'I'm so glad you wore that dress Mary… it's my favourite dress Mary' is shiver inducing, the pastoral electronics behind the vocals creating a deceptively domestic scene. This gentle family portrait cannot last however and thundering electronics and spectral wind heralds a veritable synth orchestra and syncopated choir; the cacophony summoning a deeply disturbing image of, of all things, a deranged, dribbling homicidal Jean Michael Jarre. Predating such revered electronic wizards as John Foxx (there is something very reminiscent here of his opus "Metamatic" which leaves this listener wondering if Foxx had plundered the works and sounds of The Unseen for his own dystopian visions) and the more recent hauntological works of Broadcast and The Advisory Circle, this little heard music is truly ground breaking. "Mary's Splintered Mind" is a fractured harmony of disembodied voices, backwards tapes and lunatic muttering before some Coil style xylophone adds its ghostly melody on top. Coil's "Hellraiser Themes" is another reference point; sombre, glacial keyboards leading to dynamic, flourishes and twisted anthemic orchestral moments. The psychedelic synth sweeps and creeping piano notes of "Dead Alley" create more tension than is almost bearable - listen to this with the lights off or alone at your own risk - before "Slaughter On Ladbroke Grove"s stabbing mellotrons scream piercingly, psychopathically into the night air. These then fade to melancholy piano before the keyboard stabs return (causing this listener to jolt and look behind them...no-one there...at least I think there is no-one..). "Daddy's Home' is a disturbed spoken tape recording alluding to some crazed family goings on that begs the question 'who is Mary’, or perhaps even 'what is Mary?' "The Empty Tube Station" is something John Carpenter himself would have retired happy had he written, descending glistening notes and echoing electronic shudders that raise every hair on your arms. "Mary Finally Revealed" begins with the sound of water dripping, backwards creaks and drones leading into a reprise of her title theme once more but this time more insanely driven, notes spilling over, crazed percussion leading us into the final peaks of horror until this too fades. To end, as the credits roll, "Mary’s Song" replays the ghostly lullaby but this time on stately harpsichord. It is as breathtaking moment, there is a terrifying grandeur to this soundtrack that speaks of the ambition and sheer creativity of The Unseen. The films may be low budget shockers and the most cult of cult classics, but The Unseen were visionaries way beyond their means. It is not known what else the duo recorded; Magus is uncontactable and Legg himself (an Alan Moore lookalike) disappeared in 1976 never to be seen again although he is widely rumoured to still be an active member of the infamous Penumbra Cult. And so "Mary" ends. We’re left spooked, moved, doubting what we have just heard - how can music this powerful and emotive have lain cobwebbed and dusty in some godforsaken vault for nigh on 30 years before being dragged out into the light of day to chill and thrill once more? Are there other similar classic works by The Unseen lying, well...unseen? We can only hope that before long someone will venture down into the darkness of those musical vaults once more, brave the decades of dust and spiders webs caressing their cheeks (is that was that was? It's hard to see in this darkness…) and emerge, panting and with unexplained scratches and marks on their body, with yet another lost soundtrack of this calibre.

"Mary" is available now as a strictly limited edition on the ever splendid Reverb Worship label, each with a handmade blood red sleeve featuring the protagonist herself. Shut the curtains, ignore the sound of breathing behind you and light a solitary candle. Then say hello to Mary.